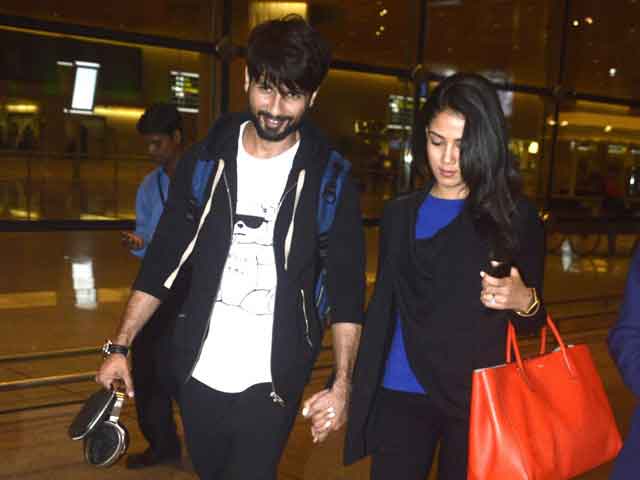 Shahid and Mira at Mumbai airport on August 25

Mumbai: Actor Shahid Kapoor said that he hasn't watched his film Shaandaar yet but director Vikas Bahl has shown it to his wife Mira Rajput as a gift for her birthday. (Also Read: Alia Bhatt's Shaandaar Gender Bender in New Song Gulaabo)

At the launch of the song Gulaabo from the film, when Shahid was asked what he gifted his wife on her birthday, he replied, "Vikas presented her a birthday gift, which was to show her Shaandaar. She came and she watched 'Shaandaar'. Even I haven't watched the film till now and Vikas has showed it only to Mira."

Gulaabo is picturized on a bachelorette party thrown by Alia Bhatt's character for her on-screen sister, played by Sanah Khan who makes her debut with the film.

When Shahid was asked how excited was he to be part of a bachelor's party (in the song) two months after his wedding, it was Alia who stood up for him.

The actress said, "I have said this time and again my friends, no wedding questions. I'm standing here, there won't be any questions. Even if you ask me about my marriage, I won't be answering them."

Shahid echoed her statement saying, "If you ask about her marriage, I'll stand for her. That's the feelings we have."