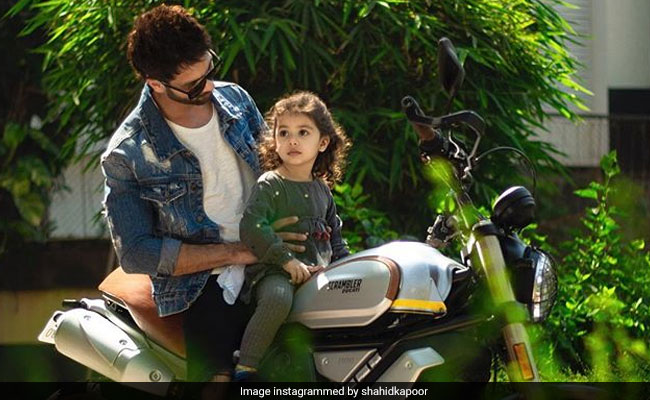 Shahid Kapoor just dropped an adorable post on Instagram, also featuring his two-year-old daughter Misha Kapoor and all we can say is "aww." Shahid Kapoor's Friday post, features little Misha sitting on his bike with the actor himself in the rider's seat. Dressed casually, Shahid leans down to check on Misha, who wears a cuteness overloaded expression. "Cause she knows she can do it all better," the "Padmaavat actor captioned the photo, which received over 5 lakh likes in just two hours! Shahid's Instafam also gave a massive shout-out to the photo as they poured in comments like: "Like father like daughter", "wow", "cutest" and "adorable."

Misha and Shahid Kapoor are riding into the weekend like this:

Cause she knows she can do it all better.

Misha often features in cute and adorable posts on her parents' respective Instagram accounts and the captions are always so darn heart-touching: "Moments we live for," Shahid wrote for a photo of Misha in cute Indian wear on Diwali.

Moments we live for.

Mira and Shahid are also parents to a son named Zain, whom they welcomed in 2018. We get a glimpse of the Kapoor's happy family in this New Year post shared in January: "Grateful for the year that made us complete."

Here's one more from Mira's Instagram and the caption will indeed win you over: "I wonder where she gets it from. Ignore the mess cause that's from before our playroom cleaning, Shahid Kapoor, ahem ahem."

Last seen in Batti Gul Meter Chalu, Shahid Kapoor has films such as Kabir Singh in the line-up. Shahid Kapoor also recently made an appearance on Karan Johar's talk show Koffee With Karan with his brother Ishaan Khatter.