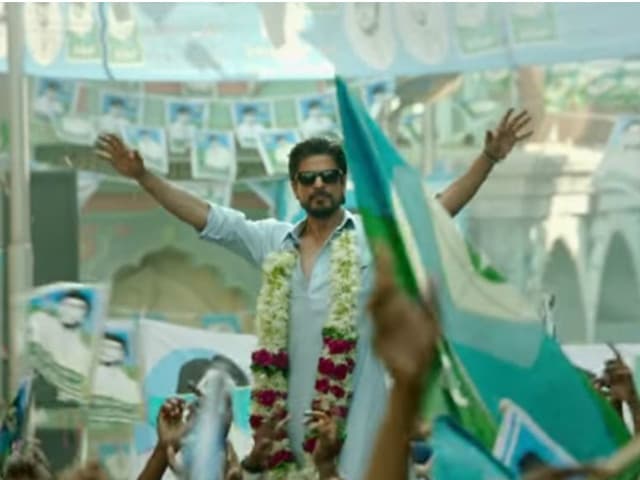 New Delhi: This is what viral looks like. Actor Shah Rukh Khan released the trailer of his new film Raees at about mid-day yesterday, and then he sat back and watched the Internet go up in flames (he didn't really sit back because he had a 'fullish' day but you know what we mean). Twitter, which has been at fever pitch for at least a week now, trended the hashtag #RaeesTrailer all day - it was the top trend. On YouTube, in less than 24 hours, the trailer of Raees has been watched almost 12 million times, and counting. On Facebook, the trailer of Raees has more than 8 million views, and on Instagram the score is more than 8 thousand. Now that's what we call breaking the Internet. Shah Rukh Khan, 51, stars in and as Raees, a liquor baron in the dry state of Gujarat.

At about 2.45 minutes, the trailer of Raees is fairly long and while most screen time is dedicated to SRK's character (and what a character it is), Nawazuddin Siddiqui's police officer also gets a large chunk of attention. In an instant recall scene, he drives a road roller over a street lined with bottles of alcohol. Pakistani actress Mahira Khan appears as Raees Alam's love interest Mohsina and there is also a glimpse of Sunny Leone, who makes a special appearance in a reworked version of the Zeenat Aman hit song Laila O Laila.


Twitter has been obsessing over the trailer of Raees from even before it was released. Celebrities like Karan Johar and Shabana Azmi have also tweeted:

Raees is a film that has been long looked for. It was originally booked for an Eid release last July but cancelled its slot to make way for Salman Khan's wrestling movie Sultan. The new date calendared was January 2017, some six months later. Raees, therefore, is overdue and the wait is making folks breathless. Raees, directed by Rahul Dholakia, will now open on January 25, the same day as Hrithik Roshan's Kaabil.

Promoted
Listen to the latest songs, only on JioSaavn.com
Meanwhile, the star of the film has what he calls a 'fullish' Wednesday. Shah Rukh Khan, one of the industry's busiest actors, tweeted about the kind of day that would have made lesser mortals hyperventilate:

Shah Rukh Khan starred in two films this year and made a special appearance in a third. He had a double role in Fan, counselled Alia Bhatt in Dear Zindagi and had a cameo in Karan Johar's Ae Dil Hai Mushkil.