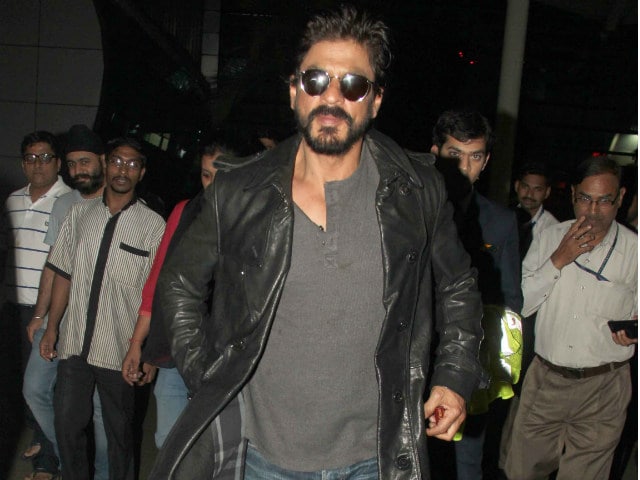 SRK photographed at the Mumbai airport.

New Delhi: No autograph or photo, a fan once sneaked into Shah Rukh Khan's house to just have a bath in his swimming pool, revealed the superstar while sharing his favourite story.

The 50-year-old actor plays an obsessive fan in his upcoming drama Fan and at a press event of the movie, he was asked about his various fan experiences from sweet to serious ones.

Shah Rukh said while there are a lot of "intense" stories, his favourite is the funniest encounter he ever had with a fan.

"One night, a person entered the house; he took off his clothes, jumped into my swimming pool and swam. When the security guard caught him asking who he was, he said, 'I don't want anything. I just wanted to bath in Shah Rukh Khan's swimming pool'," said SRK.

"I found that very endearing and amusing. When I was called down, I met and hugged him. He did not want any photo or autograph," the Dilwale star told reporters.

When asked if he ever met a fan, whose obsession alarmed him, Shah Rukh said his female admirers never "scare" him, and as far as his fan boys are concerned, they are generally sweet and sensitive.

The actor said that he is a regular person and that is the reason why people identify with him.

"My stardom dwells on the fact that I am extremely ordinary, regular person. Maybe that's why my fans are very regular and kind of cool. I am not this awe-inspiring, strong muscular man. I have never had fans, who have scared me," the actor said.

Enjoying a dedicated and an insane fan-following the past 20 years, Shah Rukh feels once a star accepts people's love, he should cater to their obsession.

"I don't know what is it that they would hold on to me so tight for. When a film of mine does not provide that happiness to fans, I take it very personally; it is not about the business, it is about how could I go wrong and let down so many people. Obsessiveness is a big responsibility. When someone loves you obsessively and you allow that and you are happy then you have to play along and cater to every obsession," he added. (Also Read: Shah Rukh Khan Explains the Difficulties of Filming Fan)