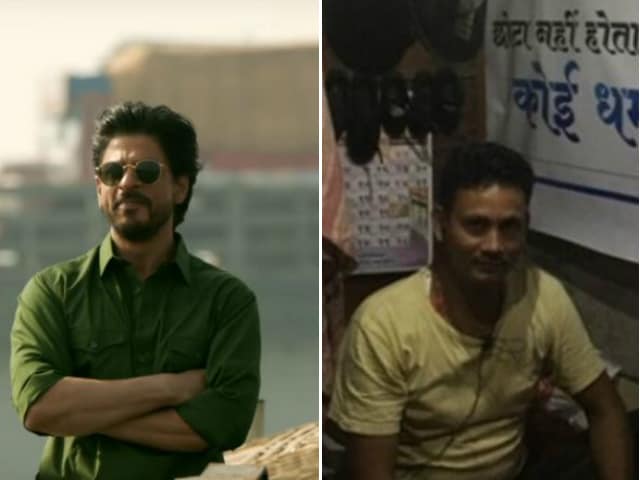 New Delhi: Shah Rukh Khan's Raees is making headlines for more reasons than we can think of. Raees stars the 51-year-old actor as Raees Alam - a liquor baron - who is based in the dry state of Gujarat. Shah Rukh portrays an underground figure who journeys from being a liquor lord to the stature of a politician in the Rahul Dholakia-directed film. Since the trailer of Raees was unveiled in December, 2016 fans and followers just could not stop raving about it with certain dialogues becoming a rage on social media. Virtual world aside, one of Raees' dialogues has inspired a Mumbai-based cobbler so much that his shop now is graffitied with a poster featuring it, reported news agency ANI. When the news reached Shah Rukh, this is what he tweeted on Thursday: "I really wish all of us develop a sense of dignity of labour for ourselves and others. Har dhanda bada hota hai."

"Koi dhandha chota nahi hota aur dhandhe se bada koi dharam nahi hota (no business is too small, no religion is greater than business)" is the dialogue which struck a chord with Shyam Bahadur Rohidas, a cobbler by profession and owns a street-side shop in Mumbai. Shyam Bahadur Rohidas is a resident of Sultanpur, Uttar Pradesh and has an inspiring story to share. When asked about his choice of profession, Shyam Bahadur Rohidas told ANI: "My Father used to work in a factory and was a part time cobbler after his work hours, I came to Mumbai for a job and that is when I learned the craft. I have mastered the skill on my own merit despite being the son of a cobbler."

Meanwhile, other Raees dialogues, which are already blockbuster favourites have also been spoken by the protagonist himself:

Raees was originally scheduled for July 2016 but was postponed to avoid a collision with Salman Khan's Sultan. Now, Raees will have a box office clash with Hrithik Roshan's Kaabil on January 25.