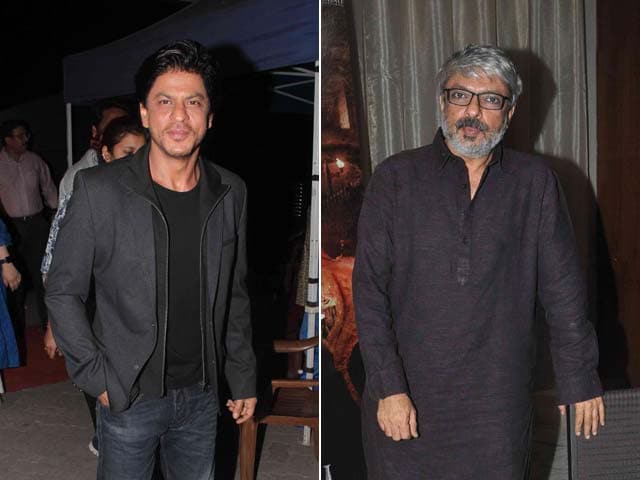 New Delhi: Looks like there is another Shah Rukh Khan and Sanjay Leela Bhansali collaboration in the making. Sanjay Leela Bhansali's ambitious project - a biopic of Urdu poet Sahir Ludhianvi - was announced last year. Shah Rukh has been roped in to play the protagonist in the film, reported Mumbai Mirror. The movie will reportedly be titled Gustakhiyan and track the poet's personal life with the spotlight on his relationships with Punjabi writer and poetess Amrita Pritam and singer Sudha Malhotra, who worked in Bollywood in the '50s and '60s. Filmmaker Sanjay Leela Bhansali has previously directed the 51-year-old actor in 2002 film Devdas.

Mr Bhansali reportedly met Shah Rukh Khan last week to hand him the script of Gustakhiyan, which is expected to open in 2018. Shah Rukh is also apparently prepping for his role already. Mumbai Mirror quoted a source close to the production as saying: "Bhansali and SRK met late one night last week and the filmmaker handed over the complete script of the biopic to SRK, telling him that he would like to direct him in 2018. There is a lot of poetry in the film and SRK has been reading Sahir's ghazals and nazms."

"Bhansali and SRK have been spending a lot of time together lately, discussing work and cinema," the source told Mumbai Mirror.

Promoted
Listen to the latest songs, only on JioSaavn.com
Rumour also has it that Priyanka Chopra and Deepika Padukone, the actresses who were directed by Mr Bhansali in Bajirao Mastani, were vying to play the role of Amrita Pritam but the casting was reportedly stalled after the director began work on Padmavati. Period drama Padmavati stars Deepika as the titular Rani Padmavati. Actors Ranveer Singh and Shahid Kapoor play Alauddin Khilji and Padmavati's husband Raja Ratan Singh respectively in the film.

Meanwhile, Shah Rukh Khan is busy with the Rahul Dholakia-directed Raees. He was last seen in Dear Zindagi, co-starring Alia Bhatt. Raees will collide at the box office with Hrithik Roshan's Kaabil on January 25. Shah Rukh Khan's film with Imtiaz Ali, co-starring Anushka Sharma, is scheduled for August 11, 2017. SRK will soon begin work on a film with Anand L Rai, in which he reportedly plays the role of a dwarf.