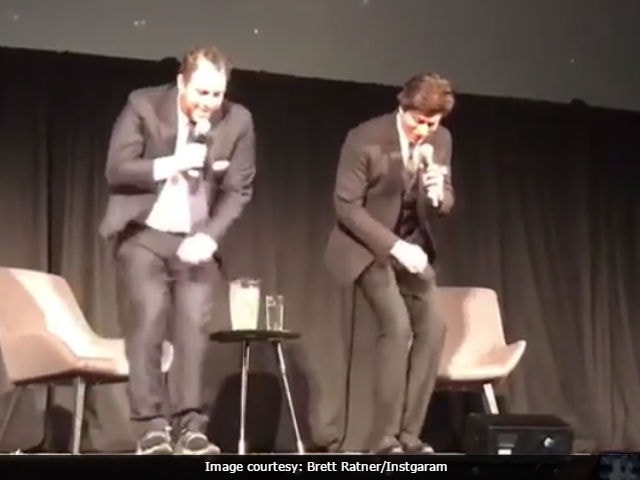 New Delhi: Superstar Shah Rukh Khan, who attended the 60th San Francisco International Film Festival (SFIFF), danced to Lungi Dance with director-producer Brett Ratner at the event. The 51-year-old actor was honoured with a special tribute at the Castro Theatre on Friday evening (US time), reports bayareahq.com, after which his film My Name Is Khan, directed by Karan Johar and co-starring Kajol, was also screened. The conversation with Shah Rukh Khan was moderated by Brett Ratner, director of X-Men: The Last Stand. Here's a glimpse of the actor singing and dancing to Lungi Dance as the Rush Hour series director tries to keep pace, amidst hoots and cheers from the audience.

With #KingKhan @iamsrk doing the #LungiDance during the @sffilm Inspiring, humble, a great dancer, and smells great too!!


Mr Ratner also gifted Mr Khan a 'doll' of himself, which the superstar later tweeted, saying, "Thx @BrettRatner for a great evening at the @SFFILM ur doll is awesome like u. (sic.)"

Thx @BrettRatner for a great evening at the @SFFILM ur doll is awesome like u. pic.twitter.com/eJNTInUHBx

If King Khan is in town, then the interaction isn't complete without his trademark pose. The actor stretched his arms and posed, with a slight tilt, making many go weak on their knees.

Meanwhile, Twitter users went overboard sharing their experiences of meeting Mr Khan in the US. The actor was almost mobbed at the entrance of the theatre. Here are a few glimpses.

The actor also tweeted to thank the festival's organisers and his fans who had come to catch a glimpse of him.

Thx for the tribute.All at @SFFILM@noah_sffilm@joshua_sffilm@kavitagupta19 u made me feel special & all who came to attend. Lov u & hugs

However, SRK was longing to be with his Kolkata Knight Rider boys. He happened to see trams and went on a nostalgic trip, missing Kolkata, where trams still ply.

Promoted
Listen to the latest songs, only on JioSaavn.com
He tweeted:

Frisco such a nice night. Saw the trams & miss Kolkata & KKR weave their magic. Will join soon.Boys u were awesome! pic.twitter.com/ZIUWRYgDgc

Shah Rukh Khan will next be seen in Imtiaz Ali's film and Aanand L Rai's untitled project, in which he plays a dwarf. He also has a guest appearance in Salman Khan's Tubelight.