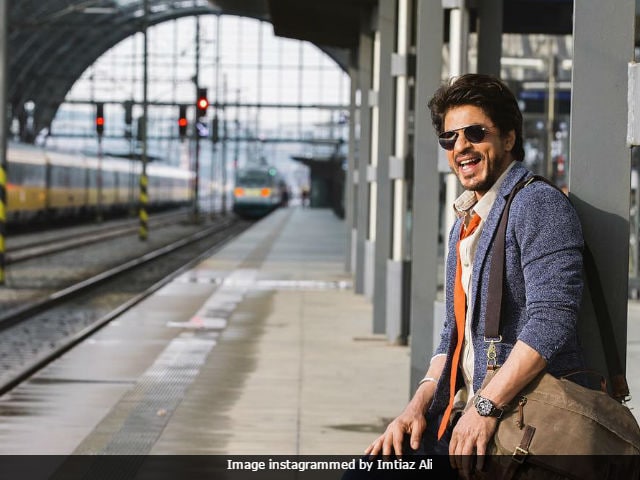 New Delhi: Shah Rukh Khan's train ka safar is almost as old as his Bollywood journey, beginning way back in 1995 when Raj's melodic mandolin made Simran (Kajol) palat in Dilwale Dulhania Le Jayenge. The DDLJ romance culminated in one of the most iconic climax scenes till date, helped in no small part by Indian Rail. Shah Rukh Khan's rendezvous with his heroines on a train has been repeated in several films and the chain hasn't been pulled yet - in tomorrow's Jab Harry Met Sejal, Shah Rukh and Anushka Sharma's song Hawayein has been filmed with the protagonists on board a train, contemplating their journey so far and the ways (maybe separate) ahead. The train and the theme of travel is symbolic of the quest for a soulmate and it is a common factor in many of Jab Harry Met Sejal director Imtiaz Ali's films.


Shah Rukh Khan's tryst with train travel has often been a metaphor for a journey of the heart, whether lonely, broken or full. In films like Dilwale Dulhania Le Jayenge, Chennai Express and Kabhi Alvida Na Kehna, the train and railway station became the point of rendezvous with the beloved. Chennai Express begins where DDLJ ended. Raj of DDLJ and Rahul of Chennai Express met their beloved Simran and Meenamma (respectively) in identical fashion - PS: Rahul copied Raj and director Rohit Shetty added a funny twist to it.

Dev of Kabhi Alvida Naa Kehna also reunited with Maya (Rani Mukerji) at a railway station, after first meeting on the latter's wedding day with tragic consequences for him. They did not get off to a smooth start. Later in the film, when they fell in love, the railway station became their meeting point.

Dil Se's Amarkant Varma begins his romantic adventure after meeting a mysterious woman (Manisha Koirala) on a train. His life turns upside down but that's another story because Shah Rukh Khan's journey in this particular films was immortalised by his famous song Chayyian Chayyian, filmed atop a train.


In Swades, Ashutosh Gowariker changed the symbolism of train from romance to that of self-realisation. Swades is undoubtedly one of Shah Rukh's finest films. In it, he plays Mohan Bhargav, who quits his career as a researcher at NASA to return to give his home country the benefit of his knowledge and experience. The moment of epiphany takes place on a train when Mohan, who usually sticks to bottled water in India, sips from a kullhar priced at Re 1 and realises where he is needed most.

There are several other minor train scenes in the SRK repertoire, in films like Devdas and Main Hoon Na, but we'd like to mention Shah Rukh Khan's Fan. Actor Aryan's obsessed (and lookalike) fan Gaurav wants to travel to Mumbai for the first time just the way the superstar did ages ago - in a train and without a ticket.


This reel journey, from Delhi to Mumbai in search of stardom, reflected Shah Rukh Khan's actual experience of leaving his hometown of Delhi for Maximum City to make it in Bollywood decades ago. He repeated it in reverse while promoting this year's Raees, taking the overnight August Kranti Express from Mumbai Central to New Delhi, stopping along the way at stations in Gujarat and Rajasthan. It was a pleasingly apt metaphor for Shah Rukh Khan's singular rise to stardom.

Promoted
Listen to the latest songs, only on JioSaavn.com
Jab Harry Met Sejal releases tomorrow and we will soon witness how Imtiaz Ali uses the train and the journey in his travel-themed film.