"I wanted to launch Hawayein in the rain. I wanted everyone to get wet and enjoy the song," said Shah Rukh 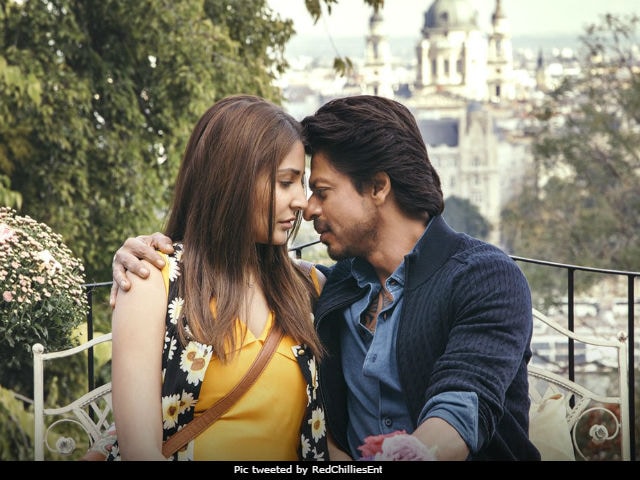 New Delhi: "Le jayein jaane kahan... hawayein hawayein... Le jayein tujhe kahan... hawayein hawayein," oh you are here... we were busy humming the tunes of the new Jab Harry Met Sejal song Hawayein. Shah Rukh Khan tweeted to say that Hawayein, which released yesterday evening, has become the most streamed song (for Indian films) within 24 hours and we know why. The 51-year-old superstar, who launched the song yesterday along with co-star Anushka Sharma and director Imtiaz Ali, said that Hawayein is the song he wanted to release during the rains. "I wanted to launch Hawayein in the rain. I wanted everyone to get wet and enjoy the song," IANS quoted the actor as saying. Hawayein has been viewed over 7.5 million times on YouTube within a day.

On Thursday, Shah Rukh responded to the love and appreciation the song has received, saying: "Thank you for the love... keep the Hawayein blowing. The actor earlier described the romantic track as "cosy". "This is a very beautiful love song, the song's title is just like today's weather, Hawayein. The song has also been picturised beautifully. It's a very cosy song. Pritam has worked very hard with Imtiaz Ali (director) and Irshad Kamil (lyricist) to make this music," Shah Rukh said at the song launch event, reported IANS.

Meanwhile, Imtiaz also shared some trivia about Hawayein: "This is the fifth song that we are releasing. I am happy with the results of the previous songs. I am glad that everyone has loved them. Hawayein is a romantic number shot mostly in Budapest. I think this is the most intimate song between Harry and Sejal in the film," IANS quoted him as saying.

Watch the song here. PS: Hawayein will indeed make you curl up in bed with a cup of tea.


Jab Harry Met Sejal playlist also comprises songs like Beech Beech Mein, ButterflySafar and Radha, which got six million views in less than a day. The trailer of the film, which was unveiled earlier this month, also had sent the Internet into overdrive garnering seven million views in almost two days.

Promoted
Listen to the latest songs, only on JioSaavn.com
Jab Harry Met Sejal is Anushka Sharma and Shah Rukh Khan's third movie together after Rab Ne Bana Di Jodi and Jab Tak Hai Jaan. It is scheduled to arrive in theatres on August 4.