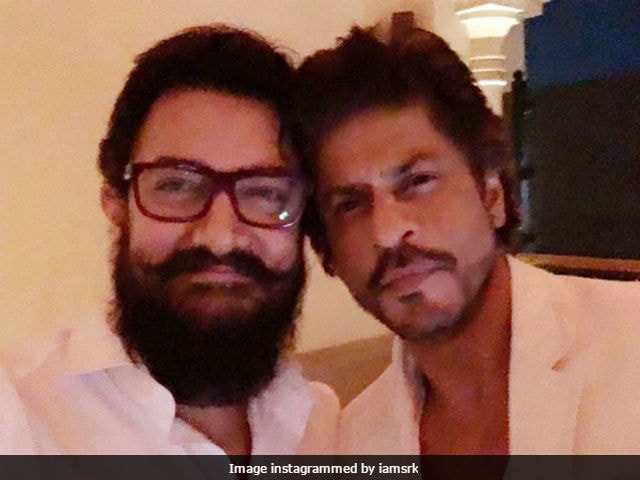 New Delhi: Shah Rukh Khan, who was spotted attending Aamir Khan's 52nd birthday on Tuesday, told news agency PTI that he doesn't discuss work with the Rang De Basanti actor when they are together. "We don't talk work. We haven't spoken about work for years. He has been in town and so am I. Last two-three times he has come home but we haven't spoken about work. There is nothing work wise that we have spoken," Shah Rukh Khan told PTI. Recently, the 51-year-old actor posted a picture with Aamir Khan and Netflix CEO Reed Hastings on social media, captioned: "Netflixed & Chilled. Thx #ReedHastings, #TedSarandos & team & my friend #AamirKhan for breaking his regimen for me(sic)." There were several reports of the actors collaborating for a project after this picture went viral on the internet.

The Kuch Kuch Hota Hai actor told PTI: "We used to meet like this earlier also...just there was not much media at that time. It is shocking that now you all know where everyone (celebrities) is."

Last month, Shah Rukh Khan had also posted his first selfie with Aamir Khan on Instagram, captioned: "Known each other for 25 years and this is the first picture we have taken together of ourselves. Was a fun night(sic)."

Shah Rukh Khan was last seen in Raees directed by Rahul Dholakia. The film also featured Mahira Khan and Nawazuddin Siddiqui in lead roles. The My Name Is Khan actor is currently shooting for Imtiaz Ali's next venture along with Anushka Sharma. He will also be seen in Aanand L Rai's next film.

Promoted
Listen to the latest songs, only on JioSaavn.com
Meanwhile, Aamir Khan, who was last seen in 2016 movie Dangal, will next feature in Thugs Of Hindostan along with Amitabh Bachchan. His other upcoming film is Secret Superstar, directed by Advait Chandan.