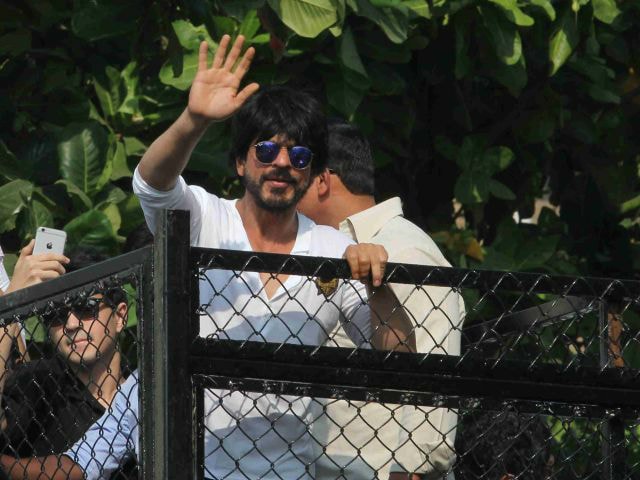 SRK at his residence in Mumbai on November 1

New Delhi: Actor Shah Rukh Khan turned 50 on Monday and, as congratulatory messages began pouring in for the actor on Twitter and elsewhere, could his fellow Khans be far behind?

Salman, who will be 50 in December, was quoted as saying by news agency PTI, "I wish him the best in life. I wish him good health, family, success and the most amazing life. I would want the whole family to be healthy. I wish that for everyone." (Also Read: Salman Wishes Shah Rukh 'Good Health and Success')

Aamir, who turned 50 in March, sent SRK this message on Twitter.

Hey Shah, many happy returns of the day. May you continue to shine and give us joy. Love. a.

Here are the rest of the Bollywood wishes for SRK's half century:

Happy birthday @iamsrk have a super year ahead, I'm coming to see u soon. In the meanwhile look what I found pic.twitter.com/HfKNWbIIie

Happy 50th to my darling @iamsrk .. 50 yrs of combined friendship, millions of happy memories n many more to come pic.twitter.com/IsKcmkzT7c

Not seen a slip in his spritely step nor his mental ticker & fatigue is for those who try to keep up with him.50? Ok!Happy birthday @iamsrk

Wishing my dilwala friend @iamsrk a very happy birthday and a wonderful year ahead :)

Happy birthday @iamsrk may all ur FANS hv a great day 2day. applause 4 ur vision n al at red chilies! Loved it.

A big reason for my beginning as a filmmaker..I will always be grateful...Happy 50 Bhai!!! Your golden era is legendary.. Big love @iamsrk

Happy birthday Bhai!!!!! @iamsrk.....all the love from all of us at @DharmaMoviespic.twitter.com/3ZIPWcaYaf

Was 1 of the lucky few to see the first cut of this at yrf, few days back. Was waiting since then. SRK fans delight https://t.co/TxzbEkLAD3

From a poor Delhi Boy to a 2nd Richest Actor in the world... An inspiration for millions. @iamsrk#Salute | SRK Day |

My blue check, Up collard Guy #IAmGaurav@iamsrk Im so in Love with you10;SRK Day pic.twitter.com/mRD8yHbHmo