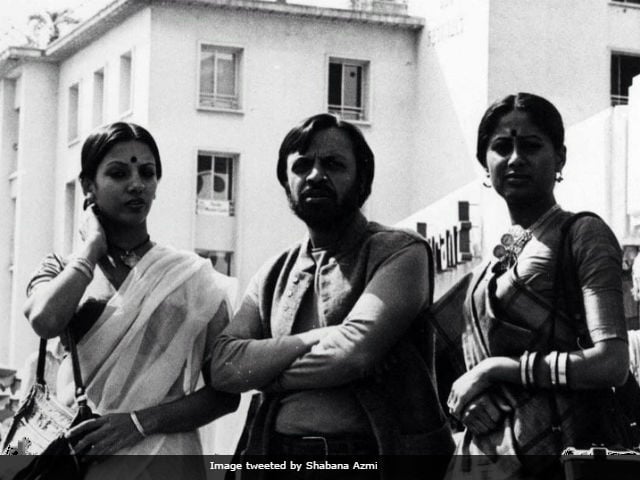 New Delhi: The Cannes Film Festival is a month away and actors from round the globe are gearing up to be a part of this prestigious film festival, which will be held from May 17 to 28. Meanwhile, veteran actress Shabana Azmi, posted a throwback picture of hers with the late actress Smita Patil and director Shyam Benegal, at the festival way back in 1976. The trio was attending the festival for the film Nishant, which was an official selection. Ms Azmi captioned the image: "In Cannes 1976, for Nishant in official section. The simplicity of it all. Film was important not the clothes! (sic.)" Unlike the recent times, when the festival is talked about as much for its fashion as for its selections, earlier years were mainly ruled by quality films.

Here's a look at the pictures she shared.

In Cannes1976 for Nishant in official section.The simplicity of it all. Film was important not the clothes! pic.twitter.com/hmHA2LHCN1

Another still from Cannes Festival 1976 Nishant in official selection pic.twitter.com/lPODdOp6Em

In fact, veteran director Shyam Benegal made the actresses walk in saris down the promenade, "for attention." Ms Azmi also shared an anecdote about their Cannes experience. "We had only eight USD, and each of us survived on the per diem provided by the festival. (sic)" Per diem is a daily allowance of expenses given per day by an organisation to cover living expenses when travelling for work.

We had only 8 USD each survived on the per diem given by the Festival.Shyam had Smita and me walk down the promenade in saris 4 attention https://t.co/RJ6Cm7RFFL

As the Neerja actress shared her picture, tweets poured in from her fans.

@AzmiShabana Two pivots of parallel cinema, wish those kinds of movies are made again!!

@AzmiShabana True mam, loved these films including several other made by Shyam Benegal sir...

Promoted
Listen to the latest songs, only on JioSaavn.com
Nishant is a 1975 Hindi film, based on an original screenplay by playwright Vijay Tendulkar. The film also stars veterans like Girish Karnad, Amrish Puri and Naseeruddin Shah. It was incidentally Mr Shah's debut film.

Bollywood has always left a mark on the Cannes red carpet. Actresses Aishwarya Rai Bachchan and Sonam Kapoor have been regulars at the festival. Katrina Kaif, who joined the L'Oreal family in 2015 in Cannes, gave a miss to the festival last year due to her work commitments.