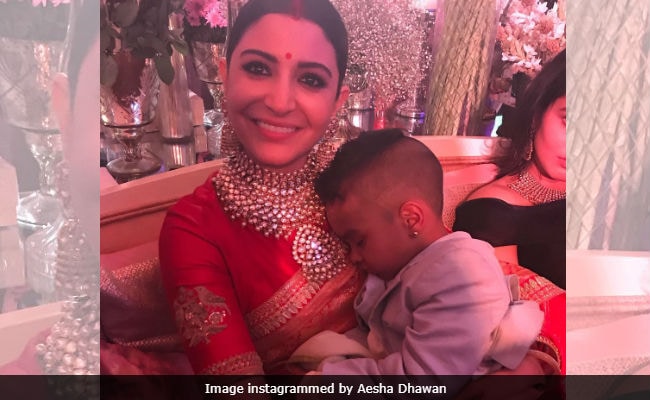 New Delhi: Anushka Sharma and Virat Kohli hosted a Delhi Reception on December 21, which turned out to be a fantabulous event. From Prime Minister Narendra Modi's arrival to Anushka Sharma's bindass dance with Virat Kohli and Shikhar Dhawan, the night had plenty high points. As Anushka and Virat take off from New Delhi, videos of their Punjabi dance moves is sending the social media into a meltdown, Pictures of the newly-weds with their guests are being shared fan clubs - all in all Anushka and Virat have ensured that no one can forget their rocking wedding bonanza any time soon. Here are the highlights from Anushka and Virat's Delhi reception:

This picture of Anushka looking after Shikhar Dhawan's son Zoravar is making the Internet very happy. This one was clicked by Zorawar's mother Aesha Dhawan, who captioned it with three heart emoticons (plus one for us, please).

Shikhar Dhawan shared a picture, which one may also find in Virat Anuhska's official reception album. We like Shikhar Dhawan's compliment for the ladies.

Anushka Sharma's dance videos, which are being circulate on social media, are giving bindaas bride goals to many. Gurdas Maan performed at Virushka Delhi reception and the attendees went berserk. He sang songs like Sajna Ve Sajna and Mauja Hi Mauja and no points for guess who took over the dance floor:

A Gift From PM Modi

Promoted
Listen to the latest songs, only on JioSaavn.com
Anushka Sharma and Virat Kohli signed Sabyasachi for their Delhi reception like for the Tuscan wedding - which also included an engagement ceremony and mehendi function before the grand event. For the Delhi event, Anushka opted for a bridal red benarasi saree while Virat looked dashing in an achkan with handmade pashmina shawl.

Virat and Anushka arrive in Mumbai today, three days before their second reception in the city. The Mumbai reception is expected to be a full Bollywood event. The couple will leave for South Africa on December 27 and Anushka will return in the New Year to complete pending projects.