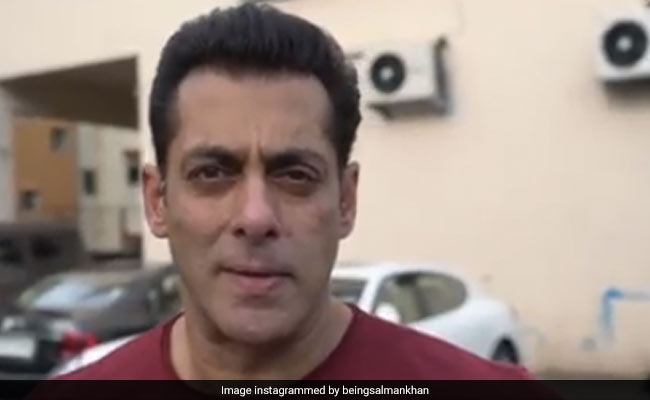 Salman Khan in a still from the video. (Image courtesy: beingsalmankhan)

As the whole nation celebrates Gandhi Jayanti on Wednesday, actor Salman Khan shared a special message on his social media profiles to mark the occasion. The 53-year-old actor posted a video of himself, in which he urged his fans to celebrate Gandhi Jayanti with much zeal and also to focus on the motto of fit India and clean India. In the video, Salman Khan can be seen saying: "Gandhi Jayanti dhoom dhaam se manayen. Afterall Mahatma Gandhi is the Father of the nation. Aur uske saath thoda sa, thoda sa hi kyun, bahut zyada fit India pe dhyaan de aur Bharat ko swachh rakhen." Gandhi Jayanti is celebrated on October 2 every year to mark the birth anniversary of Mahatma Gandhi, the tallest figure of India's freedom movement.

Gandhi Jayanti is special this year. Why, you ask? Well, to begin with, this year will mark the 150th birth anniversary of Mahatma Gandhi. Also, the government organised pan-India cleanliness drives to pay a special tribute to "Bapu", as he was fondly called. Mahatma Gandhi is also known for his strong views on non-violence and that is why, October 2 is also observed as International Day of Non-Violence across the world. Mahatma Gandhi's vision and ideas for India's independence brought the nation together and his ideals continue to inspire the world.

Several other Bollywood celebrities such Anil Kapoor and Shilpa Shetty also paid tribute to Mahatma Gandhi on social media. "Remembering Mahatma Gandhi ji's teachings on his 150th birth anniversary," tweeted Anil Kapoor while Shilpa Shetty shared a quote by "bapu" and wrote: 'The future depends on what we do in the present.' - Mahatma Gandhi. On the occasion of the 150th Gandhi Jayanti today, let's pledge to do all that we can to move towards a healthier, cleaner, and fitter nation."

"The future depends on what we do in the present."
- Mahatma Gandhi.
On the occasion of the 150th Gandhi Jayanti today, let's pledge to do all that we can to move towards a healthier, cleaner, and fitter nation.#GandhiJayanti#150thGandhiJayanti#FatherOfTheNation#MahatmaGandhipic.twitter.com/y7XMsDk8dt

On the work front, Salman Khan is prepping for his film Dabangg 3, which is the third instalment of the Dabangg series. He even changed his name on social media to Chulbul Pandey, his character's name in the film.

Directed by Prabhu Deva, the film is slated to release on December 20.