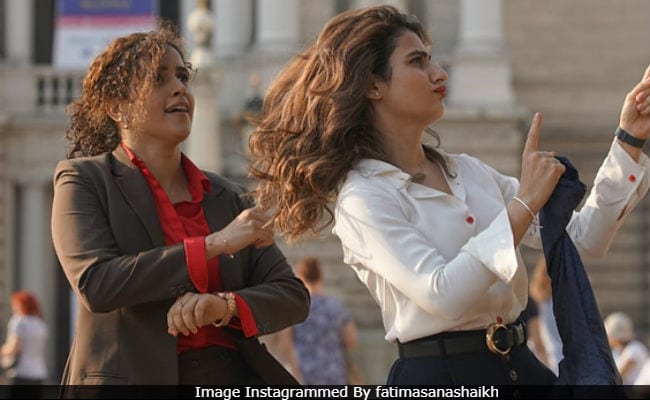 Dangal co-stars Fatima Sana Shaikh and Sanya Malhotra amused their fans on Instagram by sharing a wonderful video of themselves dancing on the streets of Europe on Thursday. They danced like no one's watching and gave major friendship goals to everyone. For those wondering what was it all about, both Fatima and Sanya have revealed the story on their Instagram accounts. The duo have shot for an advertorial for Nestle's chocolate KitKat. "Finally, it's out," wrote Sanya. In the video, Fatima and Sanya are seen doing some quirky dance steps and the Internet too is impressed with them. "So, so nice. Keep on rocking" and "this is super cute" are some of the comments on their video.

"Going bindaas in Europe. Can't believe the things Sanya Malhotra makes me do sometimes," Fatima wrote while sharing a part of the clip on Thursday.

Going Bindass in Europe Can't believe the things @sanyamalhotra_ makes me do sometimes!!!

Last month, Fatima and Sanya elated their fans by sharing a video of themselves dancing to Dilbar redux.

Fatima and Sanya recently visited China and from there, they shared several postcard-worthy pictures. They together attended the 4th Annual International Jackie Chan Action Movie Week.

They also celebrated Eid together.

On the work front, Fatima Sana Shaikh will be seen next seen with Amitabh Bachchan, Aamir Khan and Katrina Kaif in Thugs Of Hindostan. The blockbuster film Dangal was headlined by Aamir. Meanwhile, Sanya Malhotra has Vishal Bhardwaj's Pataakha up for release. In Pataakha, she co-stars with Sunil Grover and Radhika Madan. Sanya also has Badhaai Ho with Ayushmann Khurrana in the pipeline.