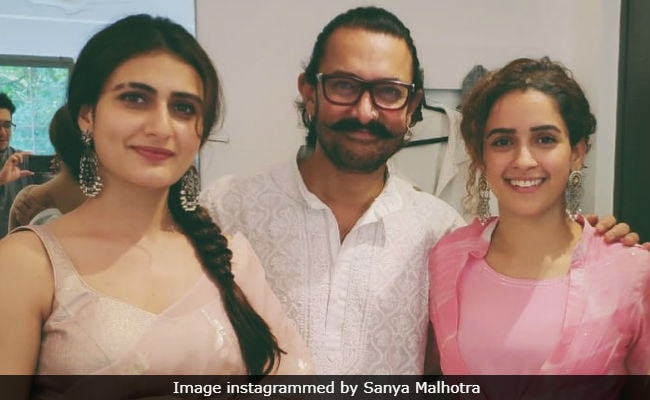 Dangal co-stars and real-life best friends Fatima Sana Shaikh and Sanya Malhotra celebrated Eid together on Wednesday. Festive fervour was added to Fatima and Sanya's Eid celebrations as the party also included their Dangal co-star Aamir Khan and his wife Kiran Ra, who appeared to be hosts of the gathering. Nitesh Tiwari, the director of the blockbuster sports biopic, was also there and so was his wife Bareilly Ki Barfi director Ashwiny Iyer Tiwari. Photos from the Eid celebrations have been shared on their Instagram accounts of the guests and Aamir's mother Zeenat Hussain was also spotted. "Eid Mubarak," Instagrammed Fatima while Sanya made us really hungry as she shared a glimpse of what was on the menu on her Instagram story.

Fatima Sana Shaikh was absolutely stunning in a pastel pink saree while Sanya Malhotra, who will soon be seen in Vishal Bhardwaj-directed movie Pataakha opted for pink traditional outfit.

Meanwhile, Aamir Khan, who was missing from the party photos, resurfaced on Twitter on Wednesday to wish his fans and followers: "Wishing everyone a very happy Eid. Eid Mubarak," he tweeted.

Wishing everyone a very happy Eid.
Eid Mubarak !
Love.
a.

During Ramzan last year, Fatima Sana Shaikh was brutally trolled on Instagram after she shared photos of herself in a swimsuit from Malta, where she was busy filming her next movie Thugs Of Hindostan. Fatima was slammed for what was seen as disrespectful clothing and it was considered as 'besharmi' simply to be seen in beachwear on the beach.

Fatima Sana Shaikh co-stars with Aamir Khan in Thugs Of Hindostan, which also stars Amitabh Bachchan and Katrina Kaif. The film is slated to release in November. Sanya Malhotra's Pataakha, which is a film about two sisters, releases in September.