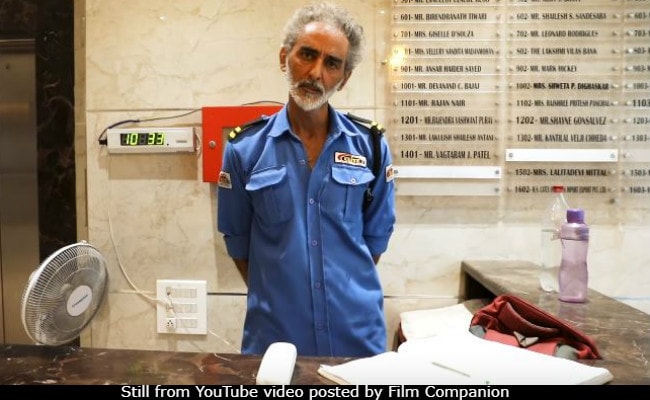 Actor Savi Sidhu, who featured in minor roles in films such as Gulaal, Black Friday and Patiala House, has been trending after his interview to Film Companion, which is now viral. Savi Sidhu is currently employed as a watchman at a building in Mumbai's Parel and in the video, he says, he had to take a break from acting due to his deteriorating health. Savi Sidhu said after the break, he found it difficult to rejoin the film industry and is currently working as a watchman to improve his financial condition. He also plans to reach out to filmmakers for work: "I'm hopeful that they will give me work. I've received positive response from them before and they will not say no. May be, they are waiting for me. Main aa raha hoon...."

Anurag Kashyap and Rajkummar Rao found Savi Sidhu's story of struggle rather inspiring and sent their best wishes to him. Rajkummar even promised to put in a word with his industry friends to help find Savi Sindhu his next acting project. This is what he tweeted: "Very inspired by your story, Savi Sidhu sir. Have always admired you work in all your films. Love your positivity. Will definitely ask all my casting friends to reach out to you... Perseverance is the key to overcoming obstacles."

Very inspired by ur story #SaviSidhu sir. Have always admired ur work in all ur films. Love ur positivity. Will def ask all my casting friends to reach out to u. Thank u @FilmCompanion for sharing his story. Perseverance is the key to overcoming obstacles. https://t.co/mITl3DsmzF

Savi Sidhu scored his first film when Anurag Kashyap cast him in Paanch, which was eventually shelved. He then starred in an important role in Anurag Kashyap's 2004 film Black Friday - Savi Sidhu played the role of Commissioner Samra. He featured in minor roles in Gulaal, also directed by Mr Kashyap, and then in Nikkhil Advani's Patiala House.

Mr Kashyap sent out a series of tweets in support of Savi Sidhu: "There are so many actors out there who don't have work. I respect Savi Sidhu as an actor and have cast him thrice when he earned the role. I respect him that he chose to live his life with dignity and picked a job unlike so many entitled out of work actors who have either become alcoholics or wasted themselves away," he wrote.

There are so many actors out there who don't have work. I respect Savi Siddhu as an actor and have cast him thrice when he earned the role. I respect him that he chose to live his life with dignity and picked a job unlike so many entitled out of work actors who have either

2... become alcoholics or wasted themselves away. Nawaz used to be a watchman, I used to be a waiter, I met one actor who sells bhelpuri on streets, I know and actor from Black Friday who drives a rickshaw, the lead from Salaam Bombay used to do the same ..

To be a watchman is a job, I don't see it as a small job or big. At least he is not begging . And I genuinely believe that charity does not make art or an artist. There are millions of stories like Savi Siddhu's.

We all make conscious choices. Go to cinemas and buy tickets for films that has unknown amazing talent like Savi Siddhu to make sure that they continue to be what they are best at, to be the artist they want to be. That's all I had to say . Thank you

We hope to see Savi Sidhu soon on the big screen.