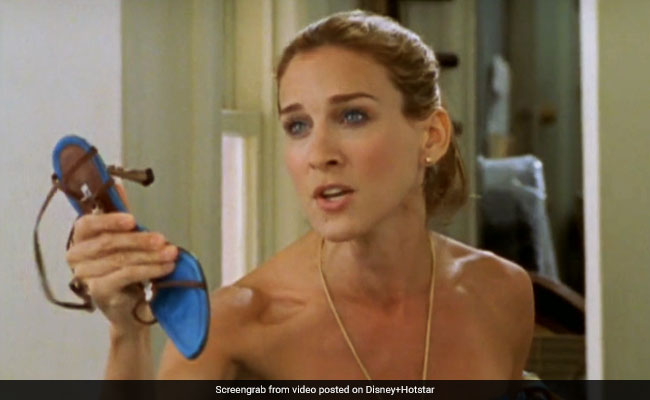 Actress Sarah Jessica Parker's latest Instagram post is an ode to her famous character "Carrie Bradshaw” from the iconic franchise Sex And The City.  She uploaded a picture of destroyed blue Manolo Blahnik heels that Carrie wore in the show. Fans were instantly reminded of this pair which was chewed up by her boyfriend Aidan Shaw's pet dog Pete. Actor John Corbett portrayed the role of Aidan in the show. Reminiscing this scene from the fourth season of the series, Sarah wrote, “Unearthed. X, SJ.” Seems like she found these in her closet. What do you think? Sarah, in one of her replies, even gave us a hint by saying, “PS they have been in the archive all these past years. Seeing them again...Well.” In the frame, we can spot the destructed version of the expensive sandal with a blue sole and brown straps.

The admirers of the show expressed their thoughts with popular dialogues in the comment box. A fan recollected, “Peeettteee. You can't buy it it's circa 1996.” A die-hard fan said, “Don't show it to me, don't even show it to me...I think I saw turquoise...That better not be the pair I think.” Someone who still needed confirmation wrote, “Are these the shoes Pete ruined?” To this Sarah Jessica Parker dropped by to reply, “Yes. Man you guys are good.” She went on to add, “ I just cannot get over how much everyone knows and recalls. . It astounds and touches me. Deeply! X”

Previously, Sarah used the Carrie Bradshaw reference to inform fans that she got vaccinated. She shared a quote from a scene along with her picture. It read, “Just so you know, I'm fully vaccinated.” The caption was, “According to The Cut. I'd assumed. Or heard rumours. Sources close to Ms Bradshaw confirmed. X, SJ.”

Before that, Sarah kept up with the trend of inserting the viral image of Vermont Senator Bernie Sanders sitting at the US President Joe Biden's inauguration ceremony. In a photoshopped snap, we can see Sarah with her Sex And The City co-stars Cynthia Nixon and Kristin Davis with Bernie in the corner.

Sex And The City ran on HBO from 1998 to 2004. It was later turned into spin-off movies. A reboot series titled And Just Like That was announced and it will stream on HBO Max. The new show will have 10 episodes. It will feature Sarah Jessica Parker, Cynthia Nixon and Kristin Davis who will navigate friendship and love in their 50s. The new series will not star Kim Cattrall, who played sexually liberated publicist Samantha Jones in the previous one.