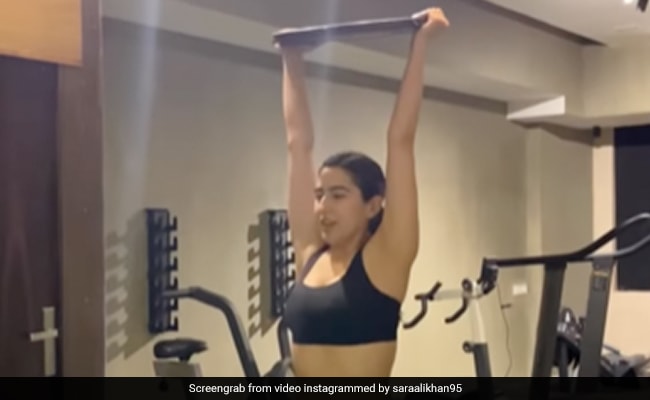 Sara Ali Khan is synonymous with fun and frolic, at least on social media. The actress, who has a wicked sense of humour, often leaves her fans in splits with her jokes and antics. But on Monday, Sara was seen doing something else she was good at – killing it in the gym. The star dropped a video in which she is seen pulling off a series of complex exercises. From lifting weights to squats, the actress does it all with ease. But there is a reason behind her dedicated Monday workout session which she revealed in the video. In the caption, she wrote: “Monday motivation. Actually JK, just prepping for Christmas vacation.” Replying to the post, Sara Ali Khan's aunt and designer Saba Pataudi said: “I'm tired. You are amazing.”

A few days ago, Sara Ali Khan shared a fun video in which she described herself using interesting words. Some of the words she used are, “Night owl, sometimes confused, determined, always always hungry, always ready for some fun, energetic, always chilling.” Sara said in the caption, “When people ask me to describe myself.”

Recently, Sara Ali Khan shared a glimpse of herself from a beach vacation, posing on a bicycle in a bikini. Sharing the image, Sara said, “Be shore of yourself. Come out of your shell. Take time to coast. Avoid pier pressure. Sea life's beauty. Don't get so tide down on work that you miss out on life's beautiful waves." The actress also added wave, sun, cycle and shell emojis in the caption.

In terms of work, Sara Ali Khan will be seen in Laxman Utekar's untitled project alongside Vicky Kaushal. Her last release was Atrangi Re! with Dhanush and Akshay Kumar, directed by Aanand L Rai.