Sanju: Ranbir Kapoor and Sanjay Dutt have shot for a song 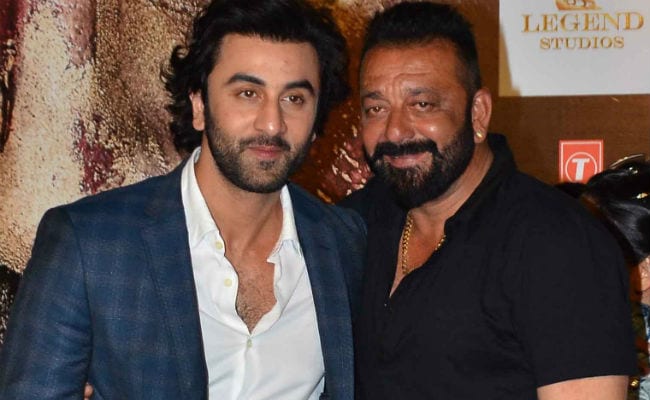 Ranbir Kapoor and Sanjay Dutt at an event in Mumbai

New Delhi: Ranbir Kapoor's much-anticipated film Sanju is a biopic on Bollywood star Sanjay Dutt and what if we tell you that he will be seen in the film too (sort of). Excited much? Indian Express reports that Ranbir Kapoor and Sanjay Dutt recently shot for a song that will be used in the end credits of Sanju. The song is a peppy dance number. "This film is a rollercoaster ride of emotions, love and friendship. And we wanted to make a fun song that depicts Sanjay Dutt's relationship with the media. This song will be part of the end credits. It will surely make the audiences' experience a complete journey of his life," a source told Indian Express.

The song wasn't initially not on cards and team Sanju had instead planned a video chat with Ranbir and Sanjay Dutt in the end credits. However, due to both the stars work commitments, the plan didn't work. Indian Express reports that earlier the film's marketing team had thought of doing a video chat, which would have Sanjay Dutt interviewing Ranbir about playing him. However, as both were busy, the plan decided to do shoot a song.

Earlier, Salman Khan had said that Sanjay Dutt should have played himself in the last portions of Sanju but Ranbir said that an actor playing their own self in a biopic "destroys the effect of a character." "I knew that I will be compared to Sanjay Dutt and that is why I have tried my best to do justice to his role. Whether people see me in 40-year-old Sanjay Dutt's avatar or 20-year-old, they should feel that they are watching an artiste who is playing Sanjay Dutt. It is correct that I cannot become a second Sanjay Dutt," he told Times Now.

Sanju trailer release last month and soon, it went crazy viral. In some parts, Ranbir looked exactly like Sanjay Dutt and even the 58-year-old actor praised him.