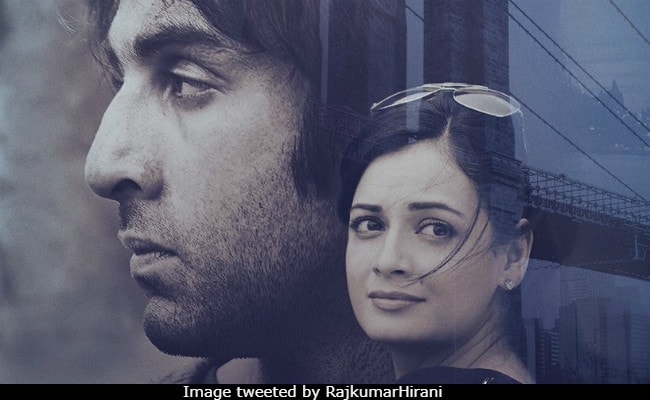 Dia Mirza on the new poster of Sanju (courtesy RajkumarHirani)

New Delhi: Team Sanju is dropping surprise after surprise in the form of new posters. On Thursday, a new poster featuring Dia Mirza was released. Dia Mirza plays the role of Sanjay Dutt's wife Maanyata in the biopic and this is how the poster was introduced on Twitter: "And here comes Dia Mirza as Maanayata, someone who stood by Sanju through thick and thin." This is the first poster of Dia Mirza that has been released but we did get a glimpse of her in the trailer, which arrived last week and sent the Internet into a meltdown. Though Dia Mirza briefly appeared in the trailer, there was no dialogue by her in it - she just accompanied Ranbir Kapoor (who plays Sanjay Dutt) with a stony expression while the onscreen Sanju spoke about his many girlfriends.

And here comes Dia Mirza as Maanayata, someone whose stood by #Sanju through thick and thin. #RanbirKapoor@deespeak#RajkumarHiraniFilms@foxstarhindi@VVCFilmspic.twitter.com/ctEdkkt7n5

Earlier this year, Dia Mirza spoke to news agency IANS and said while her role in Sanju is very exciting, she doesn't want to be stressed out with ambitious expectations about her portrayal of Maanyata. "I'm very, very excited about the Dutt biopic and my work in it. I don't want to put too much pressure on myself by thinking about the fact that it might take my career as an actor in a new direction," IANS quoted Dia as saying.


Promoted
Listen to the latest songs, only on JioSaavn.com
Apart from Dia Mirza, we have also been introduced to Sonam Kapoor (who plays Sanjay dutt's love interest), Anushka Sharma (cast as a biographer), Vicky Kaushal (the actor's best friend), Paresh Rawal (who plays Sunil Dutt) and Manisha Koirala (who has been cast as Nargis).