Ranbir's look as Sanjay Dutt is nothing compared to the uncanny resemblance between Manisha and Nargis, says Twitter 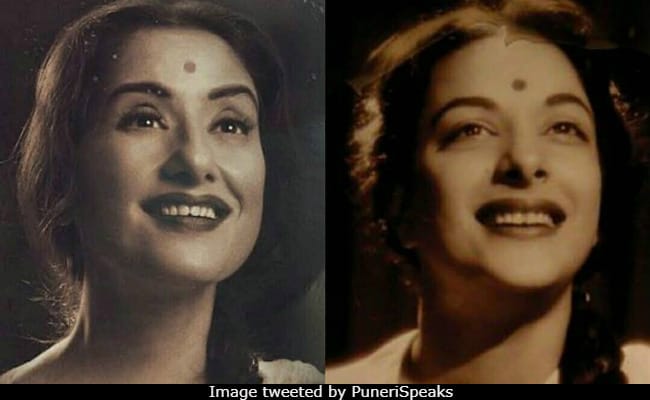 New Delhi: Manisha Koirala has really impressed Twitter with her look as Nargis for Sanju, the Sanjay Dutt biopic. Twitter basically summed up its review of the new poster in just a word - "Wow," tweeted several users. "Possibly the best Sanju poster till now. Manisha Koirala as Nargis! Wow," read another tweet. Twitter has also unanimously agreed that "there couldn't be a better choice than Manisha Koirala for the role of Nargis." Sanju stars Ranbir Kapoor as Sanjay Dutt in the movie and the new poster also features the actor in one half of it. Ranbir's look as Sanjay Dutt was officially released earlier this year, which had sent the Internet into a meltdown but apparently, that's nothing compared to the uncanny resemblance between Manisha and Nargis, says Twitter. "If we thought Ranbir Kapoor's Sanju look was the benchmark, we hadn't seen Manisha Nargis Koirala then," said a user.

Here's how much impressed Twitter is with Manisha Koirala as Nargis. In the poster, Manisha's persona as Nargis will particularly remind you of Nargis from Raj Kapoor's 1955 film Shree 420. Nargis married Sunil Dutt - her Mother India co-star - in 1958 and Sanjay Dutt was born in 1959.

The Similarity is just Unbelievable.

If we thought Ranbir Kapoor's Sanju look was the benchmark, we hadn't seen Manisha 'Nargis' Koirala then.@RajkumarHirani, you're a genius. pic.twitter.com/MbI8dnPPyz

All d best manisha ma'am ..u look like Nargis ji in pic

Pyaar Hua Ikrar Hua...
What a AMAZING transformation of @mkoirala into the ICON #NargisDutt ji! The SMILE that made everyone DEEWANA&was the HEART of #Sanju! There MUST be a biopic on #Nargis ji played by Manisha ji! Cant wait to watch the film, AWARD WINNING act for SURE pic.twitter.com/nlJ0f9hYjB

Manisha Koirala's amazing look, as the late Nargis, is so far the best thing about 'SANJU'.. Arguably, the best female actor of 1990s. Best wishes, @mkoirala

Omg.
Very nice make-up. I was really upset abt Manisha playing Nargis.
But after looking at this pic, I m really impressed.
And nobody can have any doubt about Manisha's acting talent.

There couldn't b a better choice than @mkoirala for the role of Nargis ji - the only reason i might watch this movie!! All the best for #Sanju

When Manisha was offered the part last year, she was initially apprehensive about starring as Sanjay Dutt's mother in the biopic as she has already featured opposite him in several films from the Nineties. Yalgaar, Sanam and Kartoos are some of the movies in which Manisha was cast opposite Sanjay Dutt. This is what Manisha had tweeted on Wednesday:

Feeling blessed and honored to play the role of Nargis ji in #Sanju
Watch the movie on 29th June. #RanbirKapoor#RajkumarHiraniFilms@rajkumarhirani@VVCFilms@foxstarhindipic.twitter.com/nRfFXzDI9G