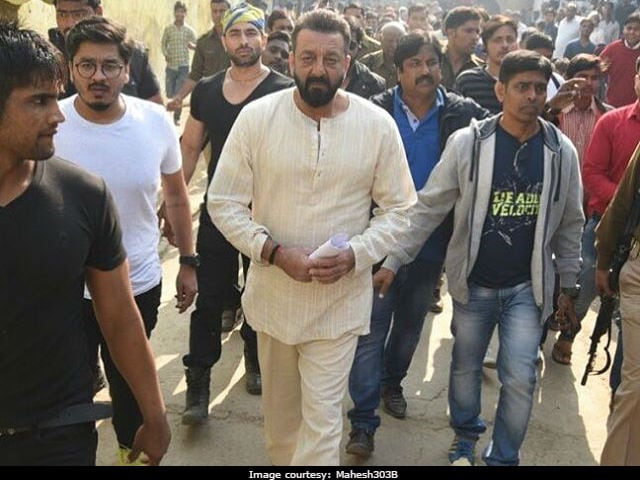 New Delhi: The shooting of actor Sanjay Dutt's comeback film Bhoomi had to be cancelled after fans gathered on the sets of the film near Agra and refused to disperse, reported mid-day. Sanjay Dutt and team zeroed in a village some 15 km outside Agra for filming a wedding sequence and scheduled it for midnight to avoid unwanted attention. But the news of the Khalnayak actor's arrival soon resulted in a huge crowd, which reportedly turned unruly and uncontrollable. Actress Aditi Rao Hydari was also supposed to be part of the sequence. Despite adequate security, it was deemed unsafe for either of the two stars to begin filming and the shoot was called off, confirmed the film's director Omung Kumar, reported mid-day. The wedding sequence will now reportedly be shot sometime this week.

director said that the crowd was unmanageable, reported mid-day. "We were all set to roll, but thousands of people just took over our set. We couldn't manage the crowd; it was impossible to shoot that night. It was in the best interest of everyone to cancel it," said Mr Kumar.

A source close to the film's team told mid-day said that security had to be sought from the State Police. "We were shooting at Kaushal Bajpai house in a village called Bamrauli Katara near Agra on Thursday. It was a night shoot and we had more than adequate security in place. Apart from Sanjay sir's bodyguards, the state police force had deployed their men on location," the source told mid-day.

Promoted
Listen to the latest songs, only on JioSaavn.com
The source also added the cast of crew of Bhoomi waited a long while before cancelling the shoot. "We didn't realise when the crowd wildly multiplied, with some turning unruly. It wasn't safe for Sanjay sir to come out for the shoot. Aditi (Rao Hydari, who plays his daughter) was also part of the scene. We waited for hours for the crowd to thin out before calling off the shoot," the source told mid-day.

Actor Sharad Kelkar plays the antagonist in Bhoomi, which is Sanjay Dutt's first film after PK. Bhoomi, which went on floors earlier this month, will be co-produced by Bhushan Kumar's T-series and Sandeep Singh and Omung Kumar's Legend Studios. Sanjay Dutt has one film each lined up with Vidhu Vinod Chopra and Siddharth Anand. He will also star in Rajkumar Hirani's Munna Bhai 3. The 57-year-old actor walked out a free man last year after serving five years of jail term in a case-related to the Bombay Blasts.

According To Mira Rajput, The Hardest Part About Parenting Is...