Sanjay Dutt Will Focus on His Career After Release, Says Subhash Ghai 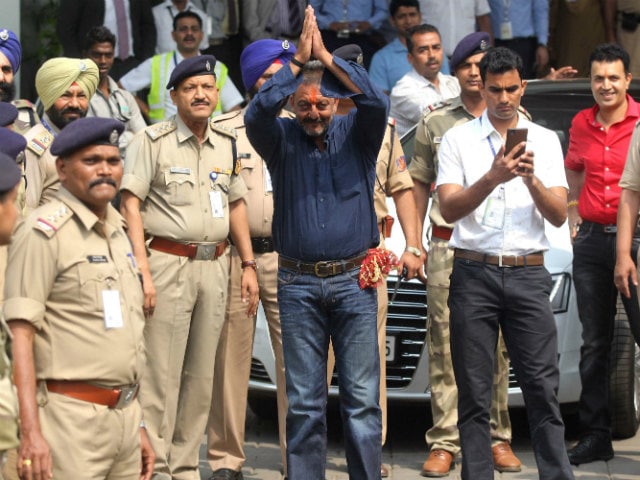 Mumbai: As actor Sanjay Dutt was released from Pune's Yerawada prison on February 25, where he served his sentence for 42 months in connection to the 1993 serial bomb blasts case, his co-stars and friends from Bollywood have wished him a peaceful life and a great career ahead. Filmmaker Mahesh Bhatt said the 56-year-old actor would emerge stronger. "People have always written his obituary but he has bounced back. He has dazzled everyone with his work. This time too I am hopeful he will come out as a more stronger man," Mr Bhatt told PTI.

"I think now on, this will be the best years of his life with new beginnings," he said. Mr Bhatt recalled how he and Dutt began their respective careers together and delivered several hits. The duo worked together on films like Naam, Gumrah, Sadak and others.

"I don't look at him as an actor and even he doesn't look at me as a director. While making Naam, we came close emotionally," he added.

The Saaransh director wished Mr Dutt and his family all the best.

"His wife Manyata wanted me to be at his home today. I think this is a personal moment for him and I don't want to invade on this time. I would surely meet him soon," he said.

Bollywood's Munnabhai has given memorable performances in many of Subhash Ghai's films, the most memorable being Khalnayak.

"If I know Sanjay Dutt since Vidhata and Khalnayak, he will come out this time with much more maturity and sense of responsibility as a human being and also as a bigger star onscreen than ever," Mr Ghai said.

"He wants to focus on his career as an actor, nothing else. That's what he told me two months back," he added.

Before going to prison in 2013 to serve the remainder of his five-year term, Mr Dutt was working on director Rensil D'Silva's Ungli.

"(Now) He needs rest; he needs to relax first, spend time with his family and near and dear ones. He is a great friend. I am happy he is back. And I wish him a peaceful life," Rensil said.

"He was going through a lot emotionally while we worked on the film but still he completed the project," Rensil added.

Actress Gracy Singh, who shared screen space with Mr Dutt in Rajkumar Hirani's Munnabhai MBBS, is elated for the actor.

"I am happy for him. I wish him immense happiness and success," she said.

Both Rensil and Gracy would love to team with up with the Khalnayak star again.

"I would love to work with him again. But as of now there is no such story idea or script that I have for him," Rensil said.

Gracy said, "I am an admirer of his work. I would love to work with him again. It would be great working with him in the third part of Munnabhai if I am offered (the project)."

Mr Dutt was arrested on April 19, 1993 and subsequently convicted for possessing a prohibited weapon AK-56 rifle under the Arms Act, in the Mumbai serial bomb blasts case. (Also Read: Sanjay Dutt Leaves Jail, Rishi Kapoor Welcomes Him Back in Tweet)

Originally sentenced to six years rigorous imprisonment (RI) by TADA court, Mr Dutt got some relief from the Supreme Court which while upholding the TADA conviction that reduced his sentence to five years in February 2013.

The actor was released on Thursday after undergoing remaining 42 months of his sentence as he had already served 18 months in prison as an under trial at Mumbai's Arthur road jail.

Meanwhile, the entrance of Mr Dutt's house in suburban Bandra was decorated with garlands to welcome him back.

Also, a photo of his late actor-politician father Sunil Dutt was put up at the gate of his building Imperial Heights along with a message that read: "Dutt Sahab Amar Rahe".

Fans too were seen eagerly awaiting for Mr Dutt's return.

Hoardings like "Welcome Back Sanju Baba", "Bandraites Welcome Back Bandra Boy Sanjay Dutt" with a picture of young Dutt with his mother were put up in the area.

Many such hoardings are put up in Munnabhai's lane.

The actor has reached Mumbai and was welcomed by his wife Maanyata.

Mr Dutt also paid a visit to the Siddhivinayak Temple at Prabhadevi in South Mumbai to offer prayers and then is expected to head his mother's (Nargis) grave at Marine Lines to pay respects before proceeding home in Bandra, where he is scheduled to hold a press conference later in the day.(See Pics: Sanjay Dutt Prays at Siddhivinayak Temple)