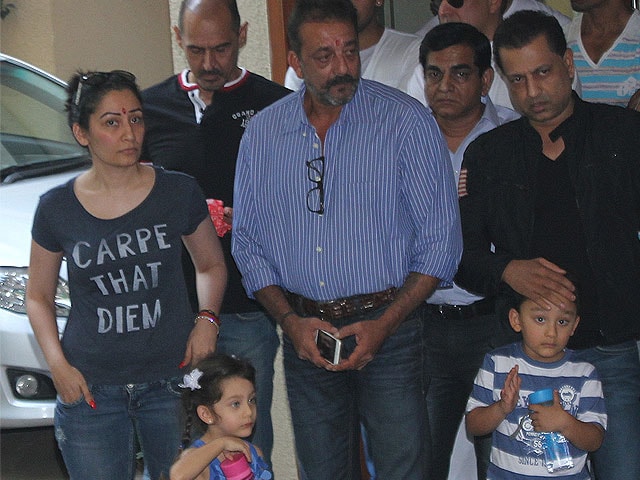 Sanjay Dutt with his family at his Mumbai residence.

New Delhi: Bollywood actor Sanjay Dutt is likely to return to prison today after the Yerwada Prison authorities in Pune rejected the plea for extending his furlough.

Mr Dutt had sought an extension of 14 days after exhausting the two weeks granted to him by jail officials. The decision came after the Mumbai police sent its report to the Yerwada prison.

"We are told the city police report was positive. Hence we have no idea as to why it was rejected," Mr Dutt's lawyer Hitesh Jain told NDTV.

On Thursday the day the furlough ended, the actor reached Pune but returned after Ram Shinde, Minister of State for Home, told news channels that Mr Dutt need not surrender until a decision has been taken on his application.

However, Mr Jain pointed out that as per a new circular issued by the prison department if an inmate doesn't report back to jail on the 29th day after the "initial 14 days and a 14 day extension taken as granted", only then it would be a violation.

But the actor won't be taking any chances, Mr Jain assured," I have advised him to surrender today itself."

Promoted
Listen to the latest songs, only on JioSaavn.com
Chief Minister Devendra Fadnavis reiterated in Delhi that Mr Dutt would not be given any special treatment. "Our government will neither favor anyone nor will it do any kind of discrimination," he said.

Mr Dutt is serving his sentence after being convicted in the 1993 Bombay Blasts Case for illegal possession of weapons.