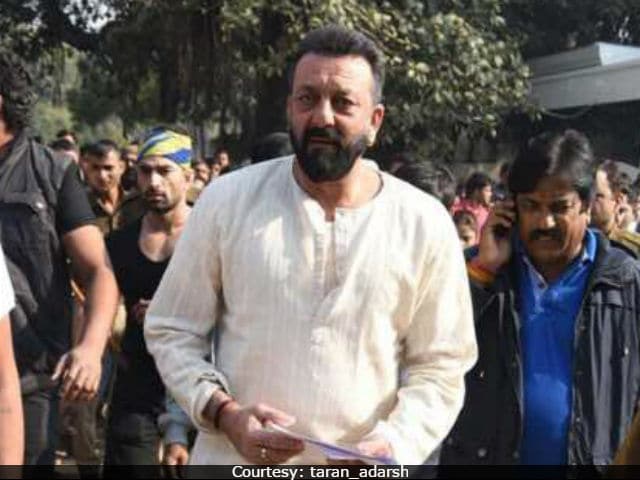 Sanjay Dutt on the sets of Bhoomi in Agra (Courtesy: taran_adarsh)

New Delhi: Sanjay Dutt's comeback film Bhoomi will hit the screens on September 22. The new release date was confirmed by Bhoomi's producers Bhushan Kumar and Sandeep Singh. Sanjay Dutt is currently filming the climax portion of Bhoomi in Mumbai. The film went on floors in February in Agra. The second schedule of the Omung Kumar-directed film was completed in Chambal. Mr Kumar told NDTV, "Sanjay Dutt has given his best performance till date and I am glad that we are increasing the anticipation for the audiences." Sanjay Dutt has earlier requested to change the release date of the film to avoid a box office clash with 'friend' Aamir Khan's film Secret Superstar. However, Secret Superstar's release date was later shifted for a Diwali release.

"Aamir is a dear friend and I wouldn't want my comeback film to be pitted against his. In this industry, we should all make an effort to help each other," Sanjay Dutt, 57, earlier told news agency PTI.

Of the new release date, producer Bhushan Kumar says, "We are extremely happy to have our film finally release on September 22 this year. Mr Dutt and our entire team found it an apt decision to shift the release date by a month as this would give us enough time to promote the film."

"Sanjay Dutt insisted that he did not want his comeback film to clash with anyone else. He believes that given the kind of hard work that goes into making a film, it can't boil down to unhealthy competition at the box office," said Sandeep Singh.

Bhoomi is an emotional and sensitive revenge drama that explores the relationship between a father and daughter.

Promoted
Listen to the latest songs, only on JioSaavn.com
Sanjay Dutt earlier told NDTV that Bhoomi is the perfect film for his comeback. He said, "I have been looking for scripts that went beyond my screen persona. I wanted to do something vulnerable yet powerful."