Samantha Ruth Prabhu Reviews Kangana Ranaut's Manikarnika Performance: 'Can't Get Her Out Of My Mind'

Samantha Ruth Prabhu wrote: "It has been two days and I can't get Kangana Ranaut's performance out of my mind" 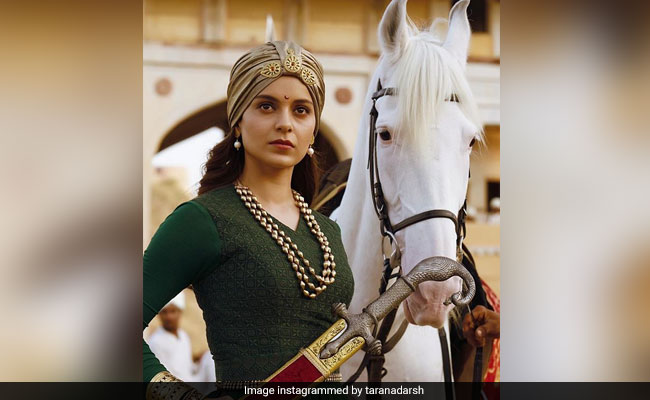 Kangana Ranaut in a still from Manikarnika (Image caption taranadarsh)

Actress Samantha Ruth Prabhu reviewed Kangana Ranaut's performance as Rani Laxmi Bai in recently released period film Manikarnika: The Queen Of Jhansi. Samantha, who watched the film two days ago, wrote on Twitter that she can't get Kangana's performance "out of her mind". She asked Kangana's sister Rangoli Chandel to congratulate her for her performance in the film and added that she has her "greatest support". "It has been two days and I can't get her performance out of my mind. The only explanation I can give myself is that she must have been 'possessed' it couldn't have been an act it just couldn't. Please congratulate her and tell her she has our greatest support," Samantha tweeted. Replying to Samantha's tweeted Rangoli wrote: "Thank you so much."

Thank you so much @Samanthaprabhu2https://t.co/FDg2f1HP5T

Kangana Ranaut's Manikarnika is doing a remarkable business at the box office. The film which opened to mostly positive reviews by the critics and audience is inches away from cruising past the Rs 50 crore mark.

However, Kangana Ranaut and her new film Manikarnika: The Queen Of Jhansi have been trending since its release not only for the box office reports but also for the controversy surrounding credits for the film's primary director. Kangana's co-director Krish claims that more than 70 per cent of his work has been retained in the final version of the film. Rangoli has been on a tweeting spree after the release ofManikarnika on Friday. After Krish said in several interviews that most of the final version of Manikarnika was filmed by him, Rangoli hit back at him saying that that everything is on record and it will take minutes to "burst his bubble".

Am sorry if it seemed like I was being reticent with regards to my support then. The details of that situation,even though spelt out by all seemed murky to me which is why I didn't jump in. Though I always maintained that Hansal's silence felt odd & rather unjust. https://t.co/1o9aS4Mqrw

...and even current post team doesn't know Krish..... they have been brought on board by Kangna ....she single handedly delivered first copy her producer was unwell ....if Krish can prove otherwise she will apologises and take her name back ... @DirKrish

Filmmakers like Pooja Bhatt and Bejoy Nambiar shared their views on the ongoing controversy on Twitter. Speaking about the on the controversy, Pooja Bhatt shared Krish's interview with Bollywood Hungama and wrote: "This is so wrong... on every level. Eventually, it is credit we work for... money comes and money goes... the first rule of filmmaking is to acknowledge people's contribution."

Am sorry if it seemed like I was being reticent with regards to my support then. The details of that situation,even though spelt out by all seemed murky to me which is why I didn't jump in. Though I always maintained that Hansal's silence felt odd & rather unjust. https://t.co/1o9aS4Mqrw

This is just heartbreaking to watch ! No one should have to go through something like this. After #Simran & @Apurvasrani 's episode this is the 2nd time someone is calling her out. EARN your credit & GIVE credit where it's due #KanganaRanauthttps://t.co/nkbEynvBXK