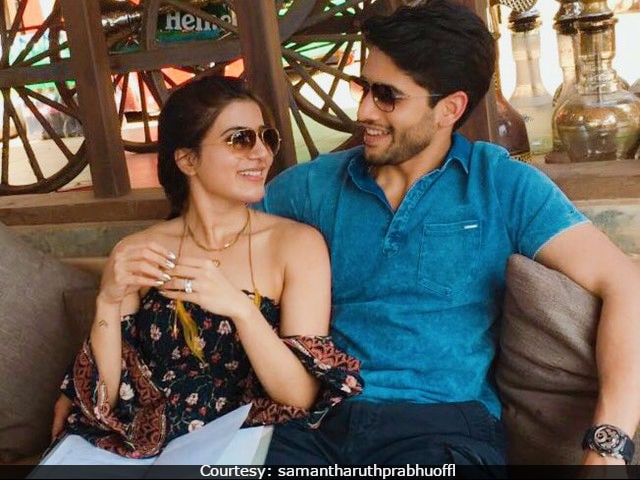 New Delhi: Star couple Samantha Ruth Prabhu and Naga Chaitanya, who got engaged on January 29, are busy spending time with each other ahead of their marriage. Samantha posted an adorable photo of hers with Naga, where both are seen dancing with friends. She captioned the image as, "Everyday, you save me." The couple's pictures on social media will melt the most unromantic hearts also. Samantha, 29, and Naga Chaitanya, 30, exchanged rings in a close-knit ceremony. They first met on the sets of 2010 film Ye Maaya Chesave and later on co-starred in two other films. It was in 2015, that the couple officially announced their relationship.

Sharing the wedding plans, Naga Chaitanya told news agency IANS that the couple is planning to get married in 2017. "I'm a very private person and I never felt the need to speak about my relationship in public. My friends have known about it for a long time. Then, when we informed our families, they supported our decision."

Here are some more pictures of the couple:

What's in a day.. more like all day , everyday #loveofmylife

Promoted
Listen to the latest songs, only on JioSaavn.com
Naga Chaitanya is the son of Telugu superstar Nagarjuna and Lakshmi Ramanaidu Daggubati. He was last seen in Sahasam Swasaga Saagipo and is currently filming NC14.

Of Samantha's work and future projects, Naga told IANS, "I don't think I'd ever tell her what she should and shouldn't do. I'm proud of her growth as an actress and I will encourage her to continue working. It was through sheer talent and hard work she got where she is today. I don't think she should throw away her successful career because of marriage."