"Shooting our first song on Race 3 with my director and the best choreographer," tweeted Ramesh Taurani 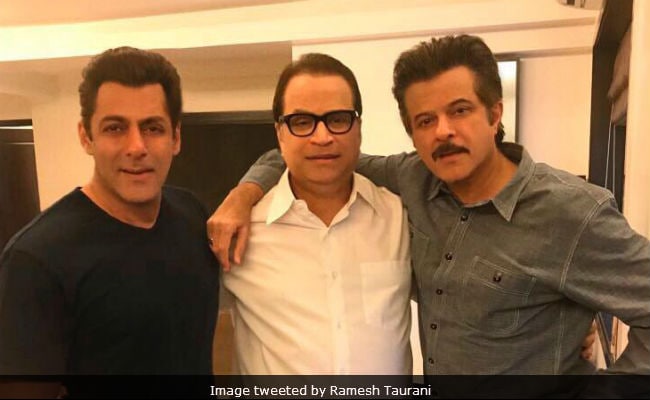 New Delhi: Salman Khan's Race 3, which went on floors in November, films the first song. The makers of the film shared details, which are definitely making the fans impatient. Producer Ramesh Taurani posted a photo himself and director choreographer Remo D'Souza, which gives a hint that Remo will be choreographing the song. Ramesh Taurani also tagged the lead actors of the film like Salman Khan, Jacqueline Fernandez, Bobby Deol and others, which means the first song will feature all the Race 3 stars. Remo has earlier choreographed Salman Khan in Bajrangi Bhaijaan's Selfie Le Le Re and Tubelight's Radio, which were super hit. Songs from other Race films like Party On My Mind, Lat Lag Gayee and Zara Zara Touch Me were loved by audience and are still on the top of our party songs' list.

Also, fans have highlighted Atif Aslam's songs like Pehli Nazar Mein and Be Intehaan (which were also super hit) from Race films and are excited about the new one from Race 3.

This is what Ramesh Taurani shared.

Shooting our first song on #race3 with my Director and the best Choreographer in the country @remodsouza@BeingSalmanKhan@Asli_Jacqueline@thedeol@ShahDaisy25@Saqibsaleem@tipsofficial@SKFilmsOfficialpic.twitter.com/HhE0Whx9Ub

Promoted
Listen to the latest songs, only on JioSaavn.com
In Race 3, Salman Khan has replaced Saif Ali Khan as the lead while Pooja Hegde and Daisy Shah also star in the film. Bobby Deol has been signed as the antagonist while Anil Kapoor is the only member of the original Race team returning to the third film. Remo D'Souza has replaced Abbas Mustan as director.