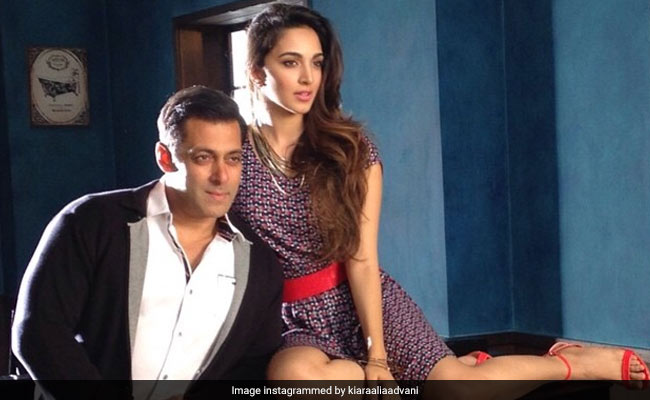 Kiara Advani with Salman Khan for a Being Human photoshoot. (Image courtesy: Instagram)

Kiara Advani, born Aaliya Advani, who debuted in Bollywood in 2014 with Fugly, says Salman Khan (who featured in a special song in the film) suggested she changed her first name because of Alia Bhatt, who has debuted two years earlier and was a name to reckon with by that time, reports news agency IANS. In an episode of Feet Up with the Stars Season 2, Kiara said: "Aaliya is my first name. Salman Khan suggested me to change it because of Alia Bhatt because there can't be two actresses with the same name in Bollywood. He suggested the change, but 'Kiara' is the name that I chose. Now even my parents have started to call me Kiara."

After Fugly, Kiara Advani featured in MS Dhoni: The Untold Story and Machine but it was her role in Karan Johar's segment of Lust Stories, which put her on the map. On the show, Kiara also recounted how she was cast in Lust Stories without auditioning for the role. Kiara said: "Karan Johar has an eye for it. He spots a performer and he knows how to get it done."

Kiara Advani has also starred in regional films such as Bharat Ane Nenu and Vinaya Vidheya Rama. She was last seen in Kalank while she is filming Good News, Kanchana remake and Shershaah.

She will be next seen opposite Shahid Kapoor in Kabir Singh, which releases on June 21.