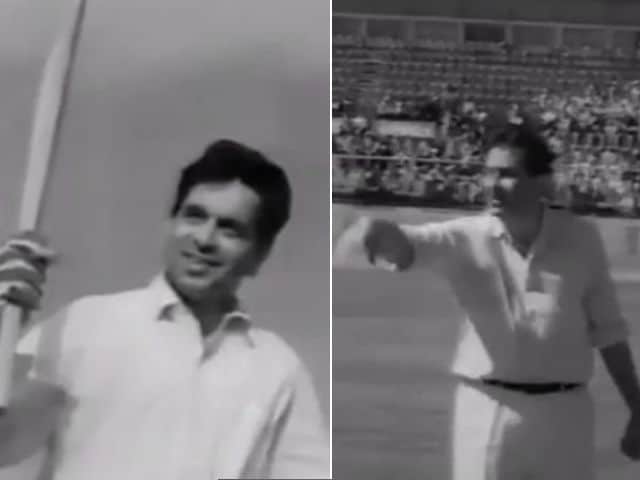 New Delhi: A mashup of old footage from a cricket match played by Bollywood stars from the Sixties keeps popping up online sporadically and has now been reposted by actor Salman Khan. The video, repackaged to the IPL theme and featuring a roster of A-list players headlined by Dilip Kumar and Raj Kapoor, went viral in April 2016. It looks to be headed towards social media fame again after being rediscovered by Salman and shared via his new app (which he launched on his 51st birthday). It's not entirely clear when and where the match was held. According to the Facebook descriptor posted last year, the charity match was held at Mumbai's Shivaji Park in 1962 or thereabouts. Funds were being raised for drought-struck Maharashtra. However, it could also have been hosted by the Maharaja of Patiala in 1956. The packed stands watched Team Dilip Kumar play Team Raj Kapoor. Players included Shashi Kapoor, Mehmood, Joy Mukherjee, I S Johar, Shubha Khote and many other stars of the era. Dilip Kumar and Raj Kapoor were great friends and co-starred in films like 1949's Andaz.

Salman Khan's tweet has since been retweeted over 2000 times.

Promoted
Listen to the latest songs, only on JioSaavn.com
Salman Khan is currently hosting television show Bigg Boss 10 which will end this month. Apart from that, Salman is busy filming Kabir Khan's Tubelight in which he co-stars with Chinese actress Zhu Zhu. The film has been shot in Ladakh and Manali and also featured late actor Om Puri, who died on Friday after a heart attack.

After Tubelight, Salman Khan will get busy with Ali Abbas Zafar's Tiger Zinda Hai, produced by Yash Raj Flims. The film is a sequel to Salman's Ek Tha Tiger which was directed by Kabir Khan. Katrina Kaif will reprise her role in the sequel too.