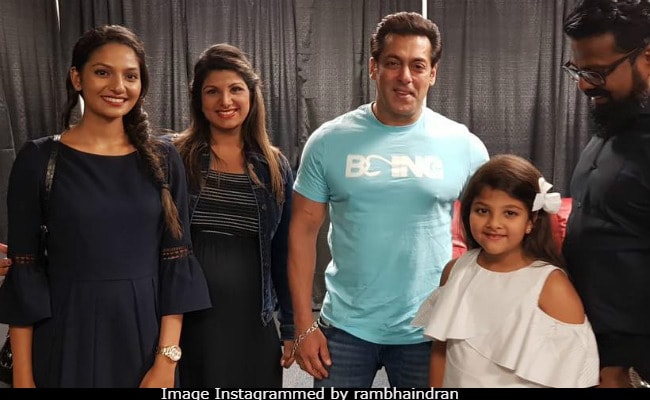 Remember Rambha? The actress who famously co-starred with Salman Khan in Bollywood cult comedy Judwaa, the 1997 movie. Salman Khan is currently touring US as part of the Da-Bangg tour and there happened a chance encounter between the 52-year-old superstar and one of his Nineties co-stars. Rambha attended the Da-Bangg show with her husband and kids and shared photos from the memorable meet on her unverified Instagram account. Rambha filled up her Instagram album with so many photos - she shared one each with Katrina Kaif, Sonakshi Sinha and Prabhu Deva, all of who are parts of the tour, but with her former co-star, she couldn't help sharing more than one and we are absolutely thrilled.

Rambha also added an interesting caption for her photo with Jacqueline, who featured in David Dhawan's 2017 release Judwaa 2. "Judwaa 1 and 2," she wrote. The second version of Judwaa cast Varun Dhawan in dual roles just like Salman Khan featured in the original one. Rambha co-starred with Karisma Kapoor in the 1997 film while Jacqueline shared screen space with Taapsee Pannu in Judwaa 2. After Judwaa, Rambha also co-starred with Salman Khan in 1998 film Bandhan, which turned out to be their last movie together.


Promoted
Listen to the latest songs, only on JioSaavn.com
In Bollywood, Rambha was last seen in Dukaan: Pila House. The former actress also has a long list of regional films -2011's Malayalam movie Filmstar was her last appearance in a movie. She also has an impressive slew of Tamil, Telugu, Kannada, Bhojpuri and Bengali films. Rambha appears to have retired from acting with her 2011 film and began making appearances as judges on reality TV shows. On TV, she was last seen in Kings of Comedy Juniors as a judge.

Meanwhile, Salman Khan will resume shooting for his next film Bharat once back on home soil. Ahead of Bharat, he will make a blockbuster cameo in Shah Rukh Khan's December release Zero.