Salma Hayek plays the role of Ajak, the leader of The Eternals, in the film while Kit Harington plays Dane Whitman (Black Knight) 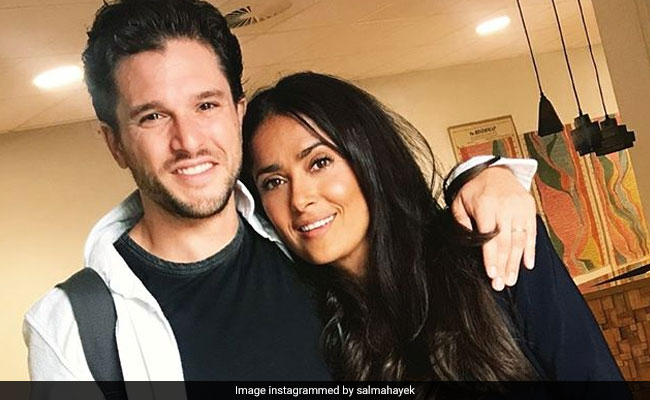 Did you know actress Salma Hayek is a die-hard fan of HBO's series Game Of Thrones? Well, the 53-year-old actress' new post on Instagram proves it, in which she can be seen posing with her favourite star from the show. Yep, we are talking about Jon Snow aka Kit Harington, who is also her co-star in Marvel's next venture The Eternals (more on that later). In Salma Hayek's latest Instagram picture, she looks stylish in an all-blue outfit while Kit Harington keeps it casual in a black t-shirt, denims and a white jacket. Salma Hayek is pretty thrilled about working with the Game Of Thrones star and her excitement about the collaboration spilled onto Instagram page.

Sharing the picture, Salma Hayek wrote: "I still can't believe that I'm working with Jon Snow! Kit, you're the best!" and accompanied her post with hashtags such as #theeternals #gameofthrones and #kitharington.

Now, before you check out their picture, here's brief information about The Eternals. The Eternals are a bunch of super-powered near-immortal beings, who were first introduced in Jack Kirby's comic book of the same name in 1976. Salma Hayek plays the leader of The Eternals, Ajak, in the film while Kit Harington plays Dane Whitman (Black Knight). Other than Salma and Kit, the work-in-progress film features an ensemble star cast, which includes Kit's GoT co-star Richard Madden, Angelina Jolie, Kumail Nanjiani, Lauren Ridloff, Lia McHugh, Brian Tyree Henry and Don Lee. Directed by Chloe Zhao, the film is scheduled to release in November next year.

Kit Harington became a popular face after his breakthrough role as Jon Snow in the television series Game Of Thrones, which concluded earlier this year with its final season.

Salma Hayek started her acting career with Mexican soap opera Teresa in 1989. Post her breakthrough film Frida, Salma has featured in several Mexican and American films such as Fools Rush In, From Dusk Till Dawn, Desperado, Wild Wild West and Americano. She has also appeared in various television series like The Hunchback, In the Time Of The Butterflies, Ugly Betty and Dream On.