Saif Ali Khan Is Unrecognisable In Pics From Hunter Sets. Bet You Agree 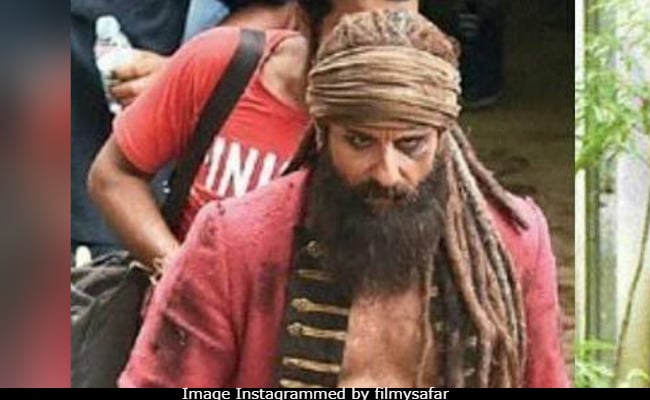 How do you like Saif Ali Khan's new look (courtesy filmysafar)

Sacred Games done. Saif Ali Khan has now transformed into what many are calling an Indian version of Johnny Depp's Jack Sparrow for his new film Hunter. Photos of Saif Ali Khan, dressed as a sadhu of sorts, at Mumbai's Filmistan studio, which were originally revealed by Mumbai Mirror and later shared by fan clubs, have taken the Internet by storm and we can understand why. In the photos, which have sent the Internet into a tizzy of sorts, Saif sports massive dreadlocks tied back with a bandana. His aggressive look is intensified by kohl-lined eyes, a front-open jacket and dhoti pants of sorts.

Saif Ali Khan had shared details about his film Hunter in an interview with DNA in June, when he hinted about a look change: "I play a naga sadhu, so I've been growing my hair and beard." Citing Saif Ali Khan's dreadlocks, some fans are of the view that he resembles Jack Sparrow to a great deal:

Check out #SaifAliKhan's look as a Naga Sadhu from his next film titled #Hunter.

Saif Ali Khan looks a far cry from his usual dapper self as he transforms into a grubby Naga sadhu for 'Hunter' pic.twitter.com/APPrB2i9ik

Saif was shooting for an action sequence, reported Mumbai Mirror, who quoted a source as saying: "Saif kicked off work around 9 am and the shoot went on till late evening. For the ongoing schedule, Rajasthan has been recreated in the studio and he is currently shooting an action sequence."

In his DNA interview, Saif had said the revenge war drama is about the battle of power between two brothers: "It's about a fight between two brothers and my character, who's almost like an animal, fights for his rights." Saif also had to train in sword fighting for his role: "As the story is set against a war backdrop, I had to learn sword fighting and different forms of action. There's a lot of post-production and VFX work involved in this project as it will have many war sequences," DNA quoted him as saying.

Hunter is being directed by Navdeep Singh. Saif Ali Khan also has Baazaar in the pipeline.