Saif Ali Khan: 'Baazaar Was A Risk But I Am Glad It Paid Off' 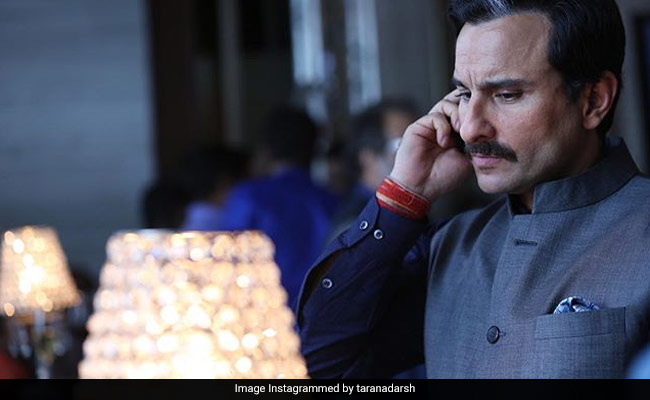 Saif Ali Khan in a still from Baazaar (Courtesy taranadarsh)

Actor Saif Ali Khan, who is basking in the success of his recently released film Baazaar, in an interview to news agency IANS said that his role in the film was "risky" but he is "glad" that "it paid off". "My role in Baazaar was challenging for many reasons. Apart from exploring a subject centered around the stock market, which hasn't been done before, my character was also very layered with shades of grey. It was a risk and I'm glad it paid off," IANS quoted the 46-year-old actor as saying. Saif portrays the role of a corporate czar Shakun Kothari in the Gauravv K Chawla-directed film. Baazaar, a stock market thriller, raked in Rs 13.63 crore within four days of its release. Baazaar is Saif Ali Khan's first film after he featured in Netflix web-series Sacred Games.

In his review for NDTV, film critic Saibal Chatterjee reviewed Saif Ali Khan's performance in Baazaar as "rock-solid". "Baazaar, which is anchored by a rock-solid pivotal performance from Saif Ali Khan, gallops at a fair clip, but it still feels a tad starchy owing to its predictable storyline. In the guise of Dalal Street's Gordon Gecko, Khan propels the film's sharper moments, conveying the unabashed amorality of a stock market trader who wears a very thin cloak of civility as he operates in a manner that leaves behinds no trail of his fraudulent practices," he wrote.

Baazaar also features actor Vinod Mehra's son Rohan, who made his Bollywood debut with the film. In an emotional post shared a day before Vinod Mehra's 28th death anniversary, Rohan wrote: "The truth is that we never had the chance to be in the same photo. I do know however, that were here today, he would be wearing the biggest smile one could imagine. I am because you were. Sorry, I am because you ARE. Your legacy is carried forward not only by me, but by the thousands you have touched. Hearing stories from people about how you lived your life, has taught me how to live my own. Trust me I strive to be more like you in every way, every single day. Thank you."