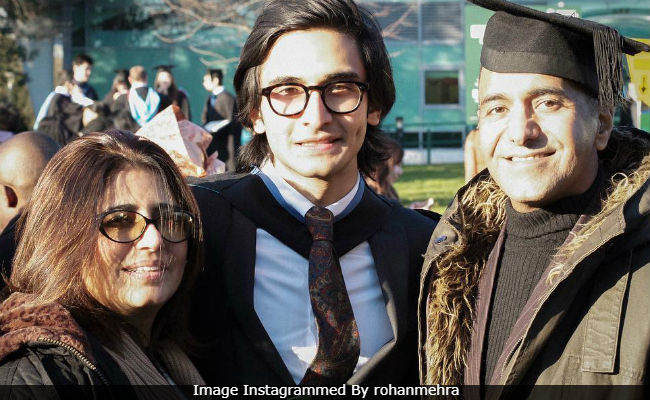 Baazaar actor Rohan Mehra, like other Bollywood stars didn't share a #10YearChallenge post, but rather treated his Instafam to almost a 10-year-old picture of himself from his graduation day. "Not exactly 10 years ago, but fresh out of the university oven nevertheless," Rohan captioned his post, also featuring his mother Kiran and a family member. '10 Year Challenge,' 'Graduation Day' and 'Why Do I Look Like Harry' (Harry Porter) are some of the hashtags he added to his post. Rohan's Instagram followers also agreed that he bore a striking resemblance to Harry Porter. "You really look like Harry Porter," read a comment.

Not exactly 10 years ago, but fresh out of the university oven nevertheless! #10yearchallenge #GraduationDay #Throwback #UniversityOfNottingham #Whydoilooklikeharry

Bet you didn't recognise Rohan at one glance.

Thank you Ahmedabad, it was an absolute pleasure!! Also, I hear Rizwan crossed that line #Baazaar #BaazaarBoys #BaazaarPromotions #SaifAliKhan #ComingSoon

Rohan also has a sister named Soniya, who debuted in Bollywood with 2007 film Victoria No. 203. They have been raised in Kenya by Kiran Mehra.

Of making a name for himself in Bollywood with Baazaar, Rohan Mehra earlier told news agency PTI, "Till last year, if I had gone to a Bollywood party, I would've walked and no one would know who I am. No one even knew I existed. They came to know when the trailer came out."