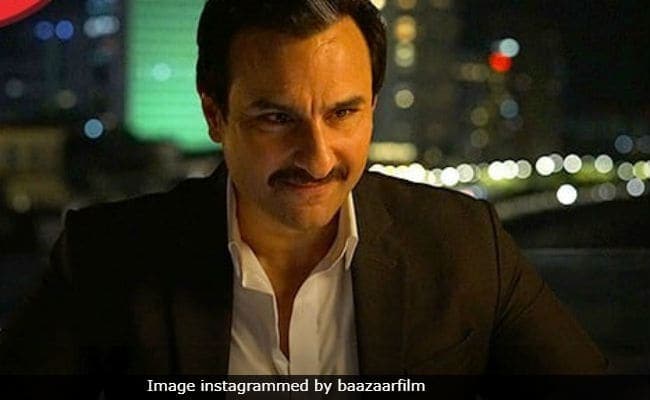 Saif Ali Khan in a still from Baazaar (Courtesy: Instagram)

Saif Ali Khan's stock market thriller Baazaar hit screens last Friday and is inching closer to Rs 14 crore since it entered the weekdays. Baazaar, which made around Rs 1.5 crore on Monday, added Rs 1.35 crore to the collections, reported Box Office India. In five days, Baazaar has scored over Rs 13 crores and is expected to wrap the week with almost Rs 16 crores: "Baazaar continued with poor business on Tuesday and is heading for a first week of 15.75 crore nett," said the Box Office India report. Bazaar is Gauravv K Chawla's first directorial venture and also stars debutant Rohan Mehra and Chitrangada Singh.

Saif Ali Khan, who plays the role of a shrewd businessman in Baazaar, recently told news agency IANS that he's glad he could successfully pull off a "challenging" role: "My role in Baazaar was challenging for many reasons. Apart from exploring a subject centered around the stock market, which hasn't been done before, my character was also very layered with shades of grey. It was a risk and I'm glad it paid off."

In his review for NDTV, Saibal Chatterjee summed up the film's essence and wrote: "Baazaar, which is anchored by a rock-solid pivotal performance from Saif Ali Khan, gallops at a fair clip, but it still feels a tad starchy owing to its predictable storyline."