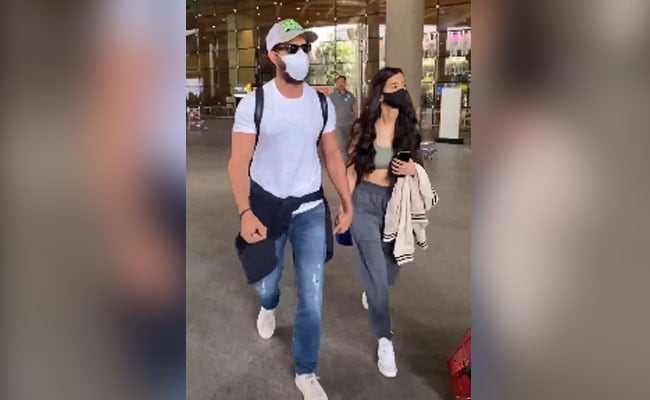 Hrithik Roshan and Saba Azad spotted at the airport

Hrithik Roshan and Saba Azad have been creating a buzz for their rumoured affair. Ever since they were first spotted in the city on their dinner date, they have kept their fans worked up with their sweet Instagram exchanges. Speaking of which, recently, Hrithik wished his rumoured girlfriend for her upcoming project. A while ago, Saba shared a post on her Instagram handle, announcing her next film, Minimum, an immigrant Indian drama feature set in Belgium. Soon after she shared the post, the War actor commented, "Hehe. You gonna kill this! Oui? Oui!". To this, Saba Azad replied, "hehe fingers crossed mon amour (my love)".

Sharing the post, Saba Azad wrote, "My next with these gems - in @variety today!! "Saba Azad, Namit Das, Geetanjali Kulkarni, Rumana Molla to Star in 'MINIMUM', Immigrant Indian Drama Feature Set In Belgium, jointly produced by Platoon One Films and Ellanar Films. Produced by Shiladitya Bora and Radhika Lavu, the film is slated to go on floors in June 2022. The international drama will be helmed by writer-actor Rumana Molla in her directorial debut"

Now, have a look at Hrithik Roshan and Saba Azad's sweet conversation: 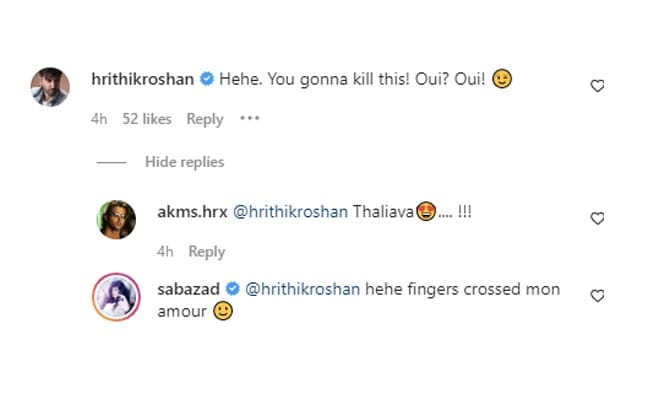 Hrithik Roshan and Saba Azad have not made their relationship official, but often they are spotted spending quality time together. Lately, the rumoured couple was snapped at the airport, walking hand-in-hand as they returned from a party in Goa.

Meanwhile, on the work front, Hrithik Roshan has several films in his kitty- Vikram Vedha with Saif Ali Khan. It is a remake of a Tamil neo-noir action thriller, which is scheduled to release on September 30, 2022. He also has Fighter with Deepika Padukone, which is slated to release next year.