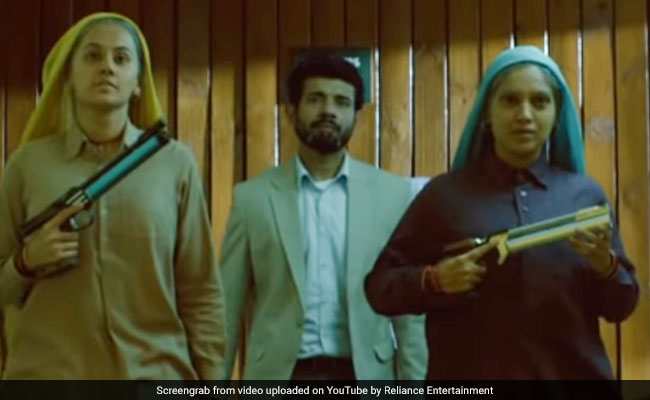 Taapsee Pannu and Bhumi Pednekar are a deadly duo in Saand Ki Aankh teaser. Taapsee and Bhumi play village dadis in the movie but beware, they aren't your regular kahaani sunane wale dadis but they are a gun-loading duo, who have won over 700 medals in their career as professional sharpshooters. Saand Ki Aankh is based on the inspiring real-life story of the Tomar sisters - Bhumi as the 87-year-old sharpshooter Chandro Tomar and Taapsee as her 82-year-old sister-in-law Prakashi Tomar. In an attempt to encourage daughters in the Tomar family to join the government initiated Johri Rifle Club, the Tomar sisters discovered their own skills as sharpshooters and then there was no stopping them.

The teaser begins with Prakashi and Chandra Tomar participating in a shooting competition and then provides the backstory of how two village women from Uttar Pradesh's Johri became inspiring figures. The teaser shifts to a scene where the Tomar sisters can be seen being trained by Dr. Rajpal, played by Vineet Kumar Singh in the movie. "I am not Arjun, I don't see bird's eye but what I see is saand ki aankh," says Taapsee in the teaser.

What follows are glimpses of how the Tomar sisters' success in the professional world are criticised by conservative family values at home but they rise above all with their bonding and determination. The Tomar sisters, the oldest sharpshooters in the world, are popularly known as the "shooter dadis" in Uttar Pradesh.

The Tomar sisters are credited to have changed the social scenario for women in Uttar Pradesh with their achievements. Watch Saand Ki Aankh teaser here:

Like Taapsee Pannu and Bhumi Pednekar said, this Diwali, there will be goliyaan and not fireworks. Saand Ki Aankh releases on October 25.