Rohit Roy Met Madhavan In Dubai. The Timing Was "A Crazy Coincidence"

"Exactly a year later at the same place!" Rohit Roy captioned the photo 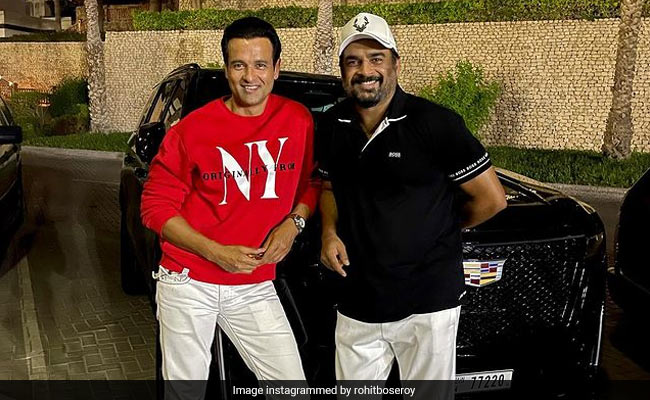 Guess what was a "crazy coincidence"? TV star Rohit Roy and actor R Madhavan meeting in Dubai "exactly" a year after they were together in UAE for the shooting schedule of the web series 7th Sense. Rohit Roy checked into Instagram with R Madhavan, tagging him in a photo, and wrote: "Brothers are back!" Talking about the time and place, Rohit Roy wrote: "Exactly a year later at the same place! Crazy coincidence eh." In the photo, Rohit Roy and R Madhavan can be seen posing together - their smiles say it all about the reunion. Here, take a look:

Last year, when lockdown restrictions were eased, Rohit Roy and R Madhavan, along with the cast and crew of 7th Sense travelled to UAE for the show's shoot. R Madhavan reportedly plays the role of a visually challenged cop in 7th Sense while Rohit Roy is said to have been cast as a veteran politician on the show. The cast of the show also includes names such as Sana Saeed, Elli AvrRam, Rohit Roy, Aashim Gulat, Tanuj Virwani and Ameesha Patel, among others. Here's the photo actor-model Tanuj Virwani shared with the show's cast and crew last year from Dubai.

7th Sense, a murder mystery, has been directed by Karan Darra with the story and screenplay by Gibran Noorani.

Madhavan will soon be seen in the sci-fi drama Rocketry: The Nambi Effect. The film that is based on the life of scientist and aerospace engineer S. Nambi Narayanan, will mark R Madhavan's debut as a director.