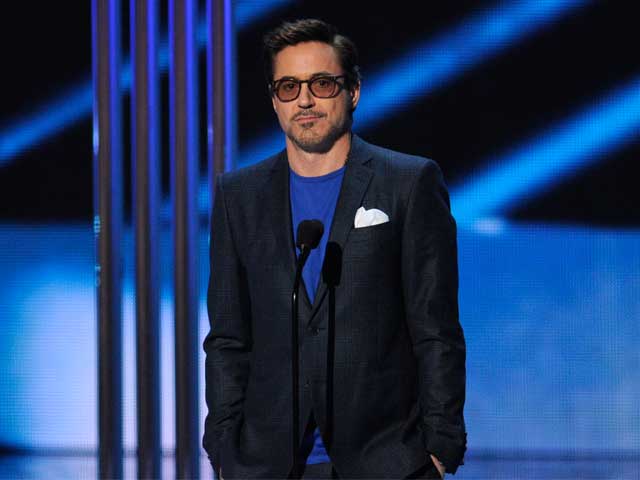 The star of The Judge and Iron Man picked up the trophies for favourite dramatic movie actor and favorite movie actor at Wednesday's fan-favorite ceremony honoring stars in film, television and music.

"This is perfect for me because I love people, I'm crazy about movies, and I prefer people who love my movies," Downey said.

"We truly have a love and passion for making this show together," said Big Bang co-star Johnny Galecki. "Honestly, it's a dream come true every day, and it's never lost on any of us for a split-second that it's entirely due to your love and support."

The gush-filled ceremony kicked off at the Nokia Theatre with Mom stars Anna Faris and Allison Janney quipping about their selection as the show's hosts. "Oh, who are we kidding?" Farris joked. "Neil Patrick Harris was unavailable, and Ellen DeGeneres said she was busy."

However, Ellen wasn't completely booked. The talk show host was on hand to pick up the trophy for favorite daytime TV host.

Ben Affleck was designated the humanitarian of the year for his work with the Eastern Congo Initiative, which he co-founded in 2010 with Whitney Williams. The organization advocates the economic and social growth of the country through various programs.

Iggy Azalea and Lady Antebellum, who performed during the People's Choice Awards with Fall Out Boy, were also champions. Azalea was deemed favorite hip-hop artist, while Lady Antebellum were crowned favorite country group.

Promoted
Listen to the latest songs, only on JioSaavn.com
"Somehow, this never gets old," Ellen Pompeo said. "I have to say it actually gets better. We're 11 seasons in, and your passion for the show keeps us going."

A couple of Ellen's absentee co-stars were also selected as victors: Patrick Dempsey for favorite dramatic TV actor and Sandra Oh as Cristina Yang for favorite TV character missed most.