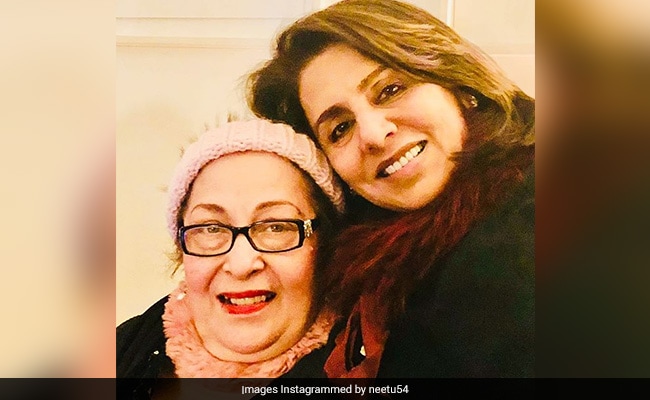 Rishi Kapoor's sister Ritu Nanda, who was married to businessman Rajan Nanda, died in Mumbai in the early hours of Tuesday. Ms Nanda, 71, had been fighting cancer for the last seven years, reports news agency IANS. Ritu Nanda was Raj Kapoor's elder daughter and the sister of Rishi, Randhir, Rajiv and Rima Kapoor. Like her sister Rima, Ms Nanda did not follow their father and brothers into the film industry; instead she set up Ritu Nanda Insurance Services very successfully. She was the mother of Nikhil Nanda, who is married to Amitabh Bachchan's daughter Shweta Bachchan Nanda, and the grandmother of Shweta and Nikhil's children Navya Naveli and Agastya. Describing Ritu Nanda's death as "sudden", Amitabh Bachchan wrote in his official blog: "My 'samdhan' Ritu Nanda, Shweta's Mother in Law passed away suddenly at 1.15 am .. cannot communicate... travelling."

Neetu Kapoor shared an emotional note on Instagram following the death of her sister-in-law. ROn Tuesday morning, Neetu Kapoor shared a photo of herself with Ritu Nanda and remembered her with these words: "My dearest, may your soul rest in peace." Neetu and Rishi Kapoor's daughter Riddhima Kapoor Sahni mourned Ritu Nanda in these words: "To the kindest most gentle person I've ever met - They don't make them like you anymore - RIP bua."

After Rishi Kapoor's return to India after almost a year, Neetu Kapoor shared a post, also featuring Ritu Kapoor, to say: "Normalcy setting in! Getting back in the groove."

Normalcy setting in !!!! Getting back in the groove

In a rare glimpse, Ritu Nanda featured in this adorable photo with her grandchildren Agastya and Navya Naveli, shared by socialite Natapasha Poonawalla.

Ritu Nanda often featured in social media posts by Neetu Kapoor, especially from the Kapoors' family get-togethers. She recently was part of a fam-jam featuring son Nikhil Nanda, his sister Nitasha Nanda and his wife Shweta Bachchan Nanda along with other Kapoors. Rima Jain is Ritu Nanda's sister (Raj Kapoor's younger daughter), was also part of the lunch along with her son Armaan and fiancee Anissa Malhotra.