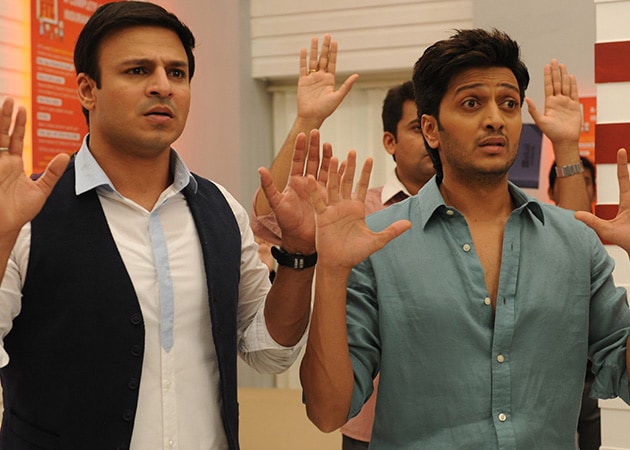 Riteish Deshmukh and Vivek Oberoi in a still from Grand Masti.

After the Masti franchise, actor Riteish Deshmukh has teamed up with his co-star Vivek Oberoi for Bank Chor and currently they are busy shooting for the film in a studio in Mumbai. Ritesh says he shares "a great chemistry" with Riteish.

A huge bank set has been put up in Mehboob Studios for the film, which has Riteish playing a bank robber, while Vivek will be seen as a CBI officer who cracks down on them.

Riteish said that his character is also "God fearing" and that 60 per cent of the film will be shot in the studio.

"I am working with Vivek again and we share a great chemistry as I have known him for a long time now. We have done workshops for 10 to 15 days and it's a very funny film," he said in a group interview.

A comic caper, Bank Chor, which also features Rhea Chakraborty, revolves around three morons trying to rob a bank and pick the worst day possible when everything is likely to go wrong.

Director Bumpy of Luv Ka the End fame is helming the film being made under Yash Raj Films' banner.

Promoted
Listen to the latest songs, only on JioSaavn.com
"I am playing a CBI officer, who is famous for closing cases. Bank Chor is a young comic film and it's not in the zone of Grand Masti, it's an altogether different movie. The film is very funny," said Vivek who recently returned from a vacation.

"I am shooting after a very long time, so I am very excited. I was on a holiday with my family and I believe it's very important to spend time with your family," added the actor who has a son with wife Priyanka Alva.