Rishi Kapoor Reveals He Has A Role In Nawazuddin Siddiqui's Manto 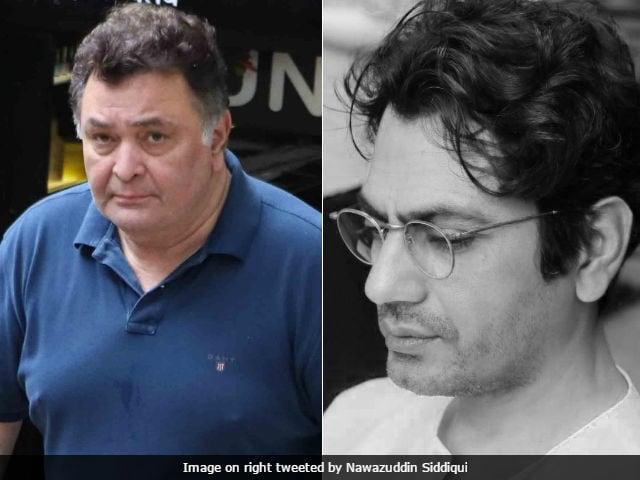 New Delhi: The biopic of writer Saadat Hasan Manto, starring Nawazuddin Siddiqui, features a special appearance by actor Rishi Kapoor, a Twitter exchange between the actors has revealed. Mr Kapoor, 64, has already filmed his scenes for the Nandita Das-directed work-in-progress. Nawazuddin Siddiqui, who plays the central role, tweeted to Mr Kapoor on Wednesday praising his "amazing energy" and calling it "a pleasure sharing the screen" with the senior actor. Rishi Kapoor responded: "Thank you Nawaz. Did that bit for Nandita Das and Manto - title role played by you. We will have fun working together in future. Regards!" This will be Rishi Kapoor's first cinematic appearance after 2016 hit Kapoor And Sons, in which he played a pivotal role.

Details of Rishi Kapoor's role haven't been revealed. The cast of Manto is believed to have originally included actor Om Puri, who died earlier this year - it is possible that Mr Kapoor has replaced him. Shabana Azmi, Nandita Das' co-star from Fire and Rishi Kapoor's from Amar Akbar Anthony, also stars in the film, as does actress Rasika Duggal who plays the author's wife Saafiya. Ms Azmi's husband Javed Akhtar is also involved.

The first look of Nawazuddin Siddiqui as Saadat Hasan Manto was released in February:

Promoted
Listen to the latest songs, only on JioSaavn.com
Director Nandita Das released six minutes of footage of her lead actor in character last month:


Ms Das is an actress of repute, known for her work in films like Bawander, Earth and Fire. She directed her first film, Firaaq, in 2008. Nawazuddin was last seen in Raees, opposite Shah Rukh Khan.