"Chintu uncle, will miss discussing food and restaurants with you," Karisma had written earlier 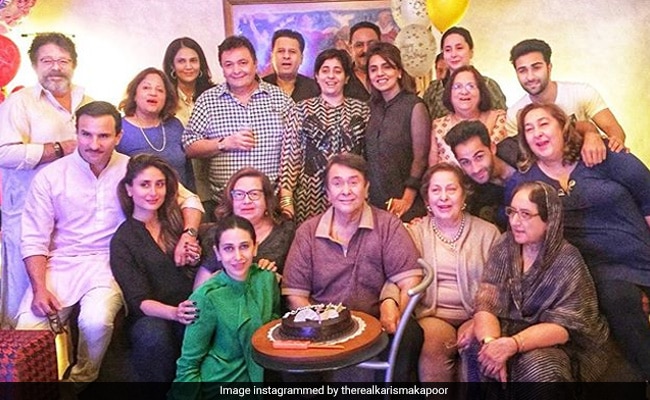 Rishi Kapoor's niece Karisma Kapoor has been flooding Instagram with posts featuring her Chintu uncle. On Friday, Karisma Kapoor paid tribute to the late actor with a throwback picture featuring the vast Kapoor clan. In the picture, Karisma Kapoor can be seen sitting on the floor beside her parents while Kareena Kapoor and Saif Ali Khan can be seen posing for the camera. Rishi Kapoor and Neetu Kapoor can be seen standing behind Randhir Kapoor as they smile with all their heart. Other members of the Kapoor family including Armaan Jain and Aadar Jain can also be seen posing for the camera. Sharing the family picture, Karisma Kapoor captioned it, "Family" and added a heart emoticon. Take a look:

Within minutes of posting, Karisma's picture was flooded with comments from her family and friends. Reacting to the picture, Sanjay Kapoor dropped heart emoticons.

Hours after Rishi Kapoor died on Thursday, Karisma Kapoor remembered her uncle with a black and white throwback picture. In the picture, a young Rishi Kapoor was seen looking at a pint-sized Karisma while Randhir Kapoor was seen touching her head. Sharing the picture, Karisma wrote a heartfelt note for her Chintu uncle. "Always looking over family.. Chintu uncle, will miss discussing food and restaurants with you," wrote Karisma. Take a look:

Rishi Kapoor, who battled cancer for the last two years, died on Thursday in a hospital in Mumbai. He was diagnosed with cancer in 2018 after which he underwent treatment in New York for almost a year. He was last seen in the 2019 films The Body and Jhootha Kahin ka. Rishi Kapoor is survived by his wife Neetu, son Ranbir, daughter Riddhima and other members of the Kapoor family.