"I grew up loving them and am so privileged to know them," said Karan Johar 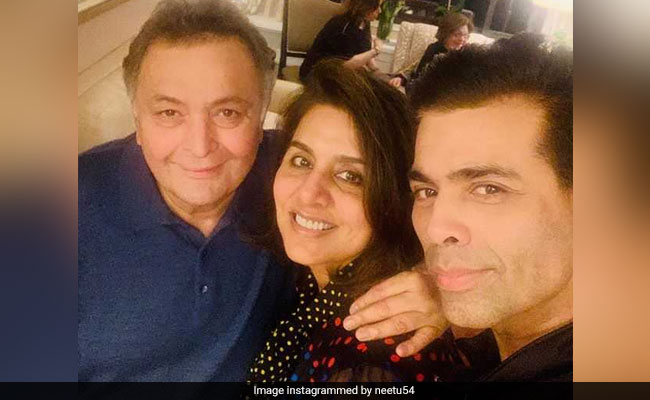 Rishi Kapoor and Neetu Kapoor, who are currently in New York, have been visited by several Bollywood stars and the latest addition to this list is Karan Johar. The filmmaker, who was in the Big Apple, managed to take some time off his busy schedule and met Neetu Kapoor and Rishi Kapoor. Karan Johar shared a picture from his meeting with his "favourite couple" on Instagram and he wrote: "My absolutely favourite couple of Indian cinema. I grew up loving them and am so privileged to know them.... Strong, resilient and full of positivity. Neetuji and Chintuji are absolutely amazing and so full of love. Thank you for your energy. Love you."

Meanwhile, Neetu Kapoor also shared a picture on her Instagram profile, in which she revealed that Karan Johar gave them the "tightest hug and the longest kiss" and said that half of the love is from his mother Hiroo Johar. "Sometimes simple words mean so big," wrote Neetu Kapoor.

Rishi Kapoor is undergoing treatment for cancer in New York and during his stay there, the actor was visited by several Bollywood stars. Earlier this month, Shah Rukh Khan, Deepika Padukone and Vicky Kaushal dropped by to meet the Kapoors, snippets from which have been shared by Neetu Kapoor on her Instagram profile.

Rishi Kapoor, who moved to New York in September last year, has now been declared cancer free. Speaking to news agency IANS recently, Rishi Kapoor's son Ranbir said: "He is doing much better. Hopefully, he should be back in a month or two and his spirits are up and there is a lot of positivity in his behaviour."