Rishi Kapoor And Mansoor Ali Khan Pataudi Are "Two Tigers" In One Frame. Thanks, Kareena 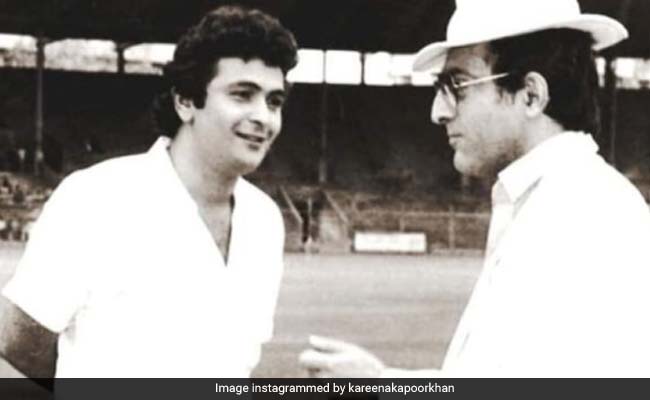 Rishi Kapoor's niece Kareena is filling up her feed with tribute posts for her Chintu uncle, most of which have connections to her husband, actor Saif Ali Khan. The day after Mr Kapoor's death, Kareena shared a black and white photo featuring the late actor and Saif Ali Khan's father Mansoor Ali Khan Pataudi, also known as "Tiger" for his reputation on the cricket pitch. "Two tigers," Kareena captioned her post. As per a mid-day report, the photo is from a friendly match between celebs and cricketers held at the Cricket Club Of India in Mumbai's Churchgate. Saif's sister, actress Soha Ali Khan also shared the same photo minutes after Kareena, with the caption: "Somewhere over the rainbow." Kareena's post is a true blue tribute to the cricket-loving Rishi Kapoor:

Earlier, Kareena shared a clip from the movie Hum Tum, in which Saif and Rishi Kapoor, in their onscreen persona, can be seen singing Main Shayar Toh Nahin. The original starred Rishi Kapoor as well - it's from his debut movie Bobby.

Hours after Rishi Kapoor's death, Kareena shared this throwback photo of her dad Randhir Kapoor and uncle Rishi, describing them as: "The best boys I know... Papa and Chintu uncle."