"The best boys I know... Papa and Chintu uncle," Kareena had written earlier 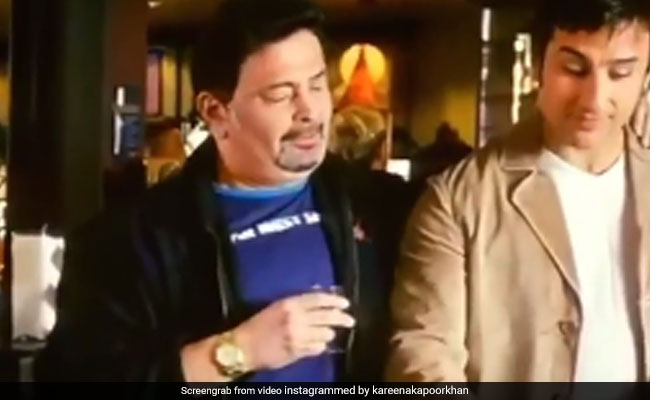 Rishi Kapoor's niece Kareena Kapoor shared a clip from the 2004 film Hum Tum and remembered her "Chintu uncle," Rishi Kapoor. Rishi Kapoor, who battled cancer for two years, died on Thursday in a hospital in Mumbai. Kareena, in her tribute to Rishi Kapoor, shared a snippet of Hum Tum where Saif Ali Khan and Rishi Kapoor were seen singing the evergreen song Main Shayar To Nahin together. The song is originally from Rishi Kapoor's 1980 blockbuster Bobby. Sharing the movie clip on her Instagram profile, Kareena captioned it with a heart emoticon. In a scene from the movie clip, Rishi Kapoor was seen introducing Saif as his son. Take a look at the movie clip shared by Kareena here:

A few hours after Rishi Kapoor died, Kareena shared a throwback picture of "the best boys" she knows. The monochrome picture featured her dad Randhir Kapoor and Rishi Kapoor. "The best boys I know... Papa and Chintu uncle," wrote Kareena.

The last rites of Rishi Kapoor took place in Mumbai on Thursday. Kareena, along with husband Saif Ali Khan and dad Randhir Kapoor, was present at the funeral of the late actor.

Rishi Kapoor, star of films such as Karz, Bobby, Amar Akbar Anthony and Khel Khel Mein among others, was diagnosed with cancer in 2018 after which he underwent treatment in New York for 11 months. He returned to India in September last year. He was admitted to the hospital twice in February this year.

Rishi Kapoor is survived by his wife Neetu, son Ranbir, daughter Riddhima and other members of the Kapoor family.