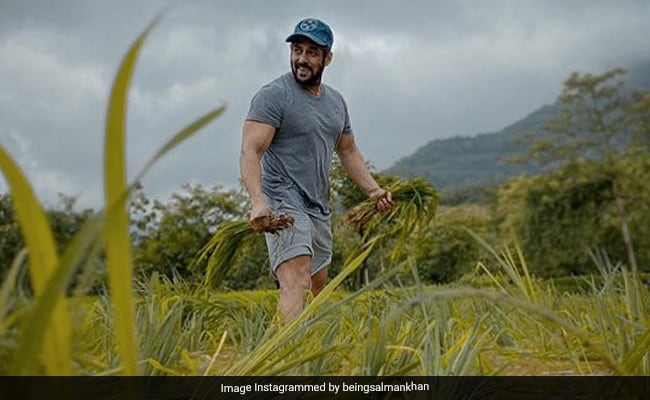 Salman Khan, who was criticised for one his recent posts about farmers, has been filling up his Instagram with videos of his "farming" around his Panvel farmhouse. His latest entry is a video of him working in a rice field, which too garnered mixed reactions from his Instafam - while some fans of the actor cheered for him, a major chunk of comments referred to his video as an example of "bad acting". "Rice plantation done," Salman captioned his video. "Please become a farmer forever and never return to films," read a comment while another added: "Bhai ki acting awesome hai." Another user commented: "Complete publicity stunt" while one more follower pointed out that Salman, who can be seen in the company of others in the rice field, is without a mask.

Here, take a look at Salman Khan's yet another "farming" post:

Last week, the Internet mocked Salman Khan for a photo of him, in which he can be seen smeared in mud, posted with the caption: "Respect to all the farmers". In the comments section, Salman was asked questions such as "Which farmer does a photoshoot?"

Following his post, Salman Khan Instagrammed a video of him ploughing a field with a tractor. He captioned it "farming", which was considered by many as his reaction to the negative comments on his previous post. But even his "farming" post didn't go down too well with the Internet, who accused Salman of "showing off."

Salman Khan has been staying in his Panvel farmhouse from before the nationwide lockdown was imposed in March. During his stay, Salman shared videos of him cleaning the farmhouse on World Environment Day and donating grocery to the needy. Last seen in Dabangg 3, Salman Khan's upcoming films are Radhe and Kabhi Eid Kabhi Diwali.