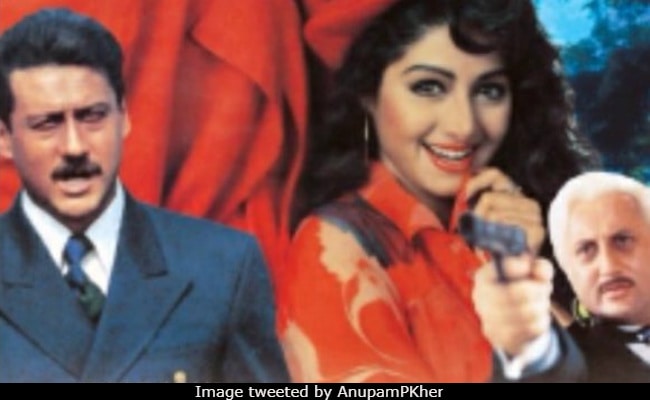 New Delhi: Actor-filmmaker Satish Kaushik (who appears to have an unverified profile on Twitter) wrote a note addressed to producer Boney Kapoor, exactly 25 years after Sridevi's Roop Ki Rani Choron Ka Raja released. Mr Kaushik, who made his debut as a director with the film, starring Anil Kapoor and Sridevi in lead roles, apologised to Sridevi's husband Boney Kapoor for the film's failure. Fondly remembering Sridevi, this is what Mr Kaushik tweeted: "Yes, 25 years ago it was a disaster at box office but it was my first child and will remain close to heart. Remembering madam #SrideviLivesForever and my sorry to Boney Kapoor who gave me a break but was broke after the film. Celebrating 25 years of RKRCKR." In his tweet, Satish Kaushik also tagged Anil Kapoor, Javed Akhtar (who wrote the film's script) and Anupam Kher (who played the antagonist). Jackie Shroff also featured in a supporting role in the film.

Roop Ki Rani Choron Ka Raja is considered to be one of the most high-budget films of the Nineties. The movie went on floors sometime in 1987 with Shekhar Kapur as the director but after he opted out of the project, Satish Kaushik was signed up to helm the film, which finally released on April 16, 1993. The delay in the film's release had further accentuated the huge budget of the movie but tanked miserably upon release. Roop Ki Rani Choron Ka Raja may have flopped at the box office but turned out to be a cult action-drama film over the years. The film cast both Anil Kapoor and Sridevi as orphans, who befriended each other at an orphanage only to be separated later. Years later, they reunited to avenge the death of their fathers.

Yes 25 yrs ago it was a disaster at BO bt it was my first child & will remain close to heart. Remembering madam #SrideviLivesForever & my sorry 2 @BoneyKapoor who gave me a break bt was broke after d film.celebrating #25yearsof RKRCKR @AnilKapoor@Javedakhtarjadu@AnupamPKherpic.twitter.com/mXoogmQha5

Meanwhile, Twitter is making all efforts to uplift Satish Kaushik's spirits, hailing the film as nothing less than "superb". "Your failure doesn't undermine your talent. Your honest admission is the proof that you succeeded later and made a mark on the India cinema," wrote an user while another one demanded that the film be released again. "It's was awesome movie. Train sequence was awesome. Aj bhi copy ho rahe he ye sequence thoughts. Or Romio Naam Mera to dance number tha. It was in 1993.. awesome blockbuster movie. Dobara relese karo."

Your failure doesn't undermine your talent. Your honest admission is the proof that you succeeded later and made a mark on the India cinema @satishkaushik2

Actually it was great movie..and keep you glued throughout... Why it turned disaster?? Infact it have many best dialogues like.. Acha hua Bura Hua , Shaitan ki Kasam and the toning of Bete Jaan by @SirPareshRawal . It was a full packed entertainer

Satish ji but I watched this movies 8 times, after my school bunk....

Promoted
Listen to the latest songs, only on JioSaavn.com
Here's how Anil Kapoor and Anupam Kher celebrated 25 years of the movie on Twitter:

Can't believe it's been 25 years for #RKRCKR I remember the obstacles that we faced during the shooting of this film & after as well but it was still a memorable journey. We miss the Roop Ki Rani every day. @BoneyKapoor@satishkaushik2@Javedakhtarjadu@AnupamPKher@bindasbhidupic.twitter.com/xdpkxD9JJ1

I have great memories of #RoopKiRaniChoronKaRaja which completes 25years. 'Shaitan Ki Kasam' will always be proud of my association with the film & with @BoneyKapoor@satishkaushik2@AnilKapoor@bindasbhidu & @SrideviBKapoor. In some failures there are greater success stories. pic.twitter.com/wWU0bBY2Jt

Sridevi married Boney Kapoor three years after Roop Ki Rani Choron Ka Raja was made. Khushi and Janhvi are their two children. In February, Sridevi drowned in a Dubai hotel bathroom and was later cremated with state honours in Mumbai. She has posthumously won the Best Actress National Award this year for her performance in MOM.